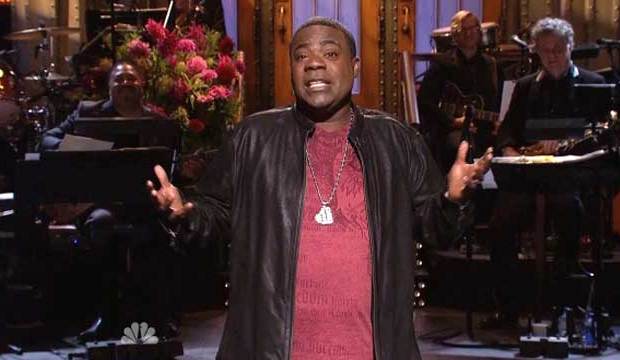 After a near fatal car accident left it uncertain whether he would ever perform again, Tracy Morgan made a triumphant return to host “Saturday Night Live” and snagged an Emmy nomination for Comedy Guest Actor. This marks his second career bid, after a Comedy Supporting Actor nomination for “30 Rock” (2009). Can Morgan’s emotional and hilarious return to the show that made him famous inspire voters to reward him his first win?

SYNOPSIS
Morgan talks about his accident during the opening monologue and appears in a “30 Rock” parody featuring Tina Fey, Alec Baldwin, Jane Krakowski, and Jack McBrayer. During the show, he reprises his classic “SNL” characters Brian Fellow of “Safari Planet” and Sci-fi Astronaut Jones; plays “Family Feud” against the wife and children he left behind for another woman; and turns a bar fight into a tango.

The episode, the 3rd of the 41st season, featured musical guest Demi Lovato, and was Morgan’s second stint as host; he previously presided over the program in 2009 during its 34th season.

Will the second time be the charm for Morgan? Let’s look at the pros and cons.

PROS
The rooting factor: Morgan returning to the stage after a long and arduous recovery is very emotional, especially in the opening moments where the “30 Rock” gang stop by to show their support. Voters may look at an Emmy win as the perfect welcome home gift to one of television’s favorite performers.

Hard to believe that Morgan has never won an Emmy, not even for his iconic character on “30 Rock.” If voters become savvy to that, expect an outpouring of support.

Best of all, this episode is funny, reminding voters that “comedy” is indeed a main factor in this category.

CONS
One of his chief competitors, Larry David, makes an appearance in the opening sketch as Bernie Sanders, which could only remind voters of the incredible year the comedian had on the sketch comedy series.