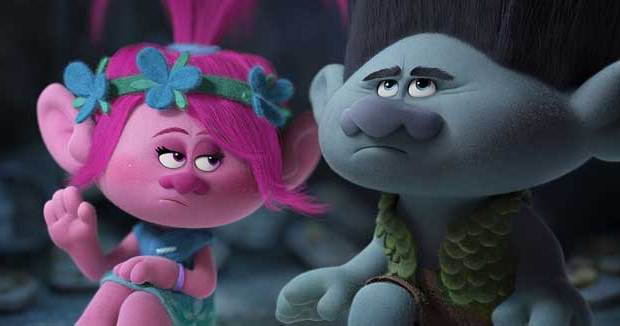 The first time Dreamworks Animation won the Oscar for Best Animated Feature was for a movie about grotesque figures in fairy tales – that ogre classic “Shrek.” Now the studio takes a new trek into those same spooky woods with “Trolls” as it enters the next academy derby.

But these creatures aren’t evil as per folklore. “Our trolls are constantly optimistic,” co-director Walt Dohrn tells Gold Derby. “They’re always singing, dancing and hugging.” Instead, the villains are “bergens,” who feed on the fun, literally.

“When bergens eat a troll, they feel this intense feeling of happiness,” he adds, “but it doesn’t last, so they want to eat another.”

The duo paired up to stop them are the trolls’ unflaggingly upbeat princess Poppy (voiced by Anna Kendrick) and a grouch named Branch (Justin Timberlake) who really just wants to hide from the bergens down in his booby-trapped Fear Bunker.

Timberlake casts a magic spell all over this film. He produced all 13 songs, which include five original tunes — four penned by Timberlake. The big breakout hit is just-released “Can’t Stop the Feeling,” a strong rival in the Oscar race for Best Song. Tune in below. He’s never been nominated for an Oscar, but won Best Song twice at the Emmys, including his infamous duet with Andy Samberg, “Dick in a Box.”

The other big hit in this film is the trolls’ notorious, candy-colored hair, which was popularized by the toy dolls back in the 1970s.  “The trolls can throw it, change the color of it,” notes producer Gina Shay. Timberlake’s character even uses his own locks like a whip so he can move speedily through the woods.

“Their hair is a signature look,” she adds, “so we decided to make their whole world like their hair – a big fuzzy immersion that feels like reality wrapped in felt and velvet.”

“Trolls” will be released internationally in late October, then debut in U.S. theaters on Nov. 4 – just in time for Oscarmania.