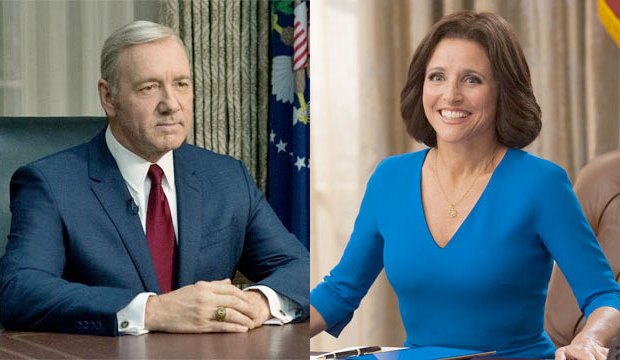 TV has given us all kinds of presidents to both admire and shun in 2016. There’s the duplicitous Frances Underwood (Kevin Spacey on “House of Cards”), the selfish Selina Meyer (Julia Louis-Dreyfus on “Veep”), the adulterous Fitzgerald Grant (Tony Goldwyn on “Scandal”), the compassionate Conrad Dalton (Keith Carradine on “Madam Secretary”), and fish-out-of-water Tom Kirkman (Kiefer Sutherland on “Designated Survivor”). But which TV POTUS would you vote for? Cast your vote in our poll below our readers’ colorful responses from our TV forum.

AMG: Selina Meyer – because while everything will turn to s***, at least we’d be able to laugh about it!

Hunterbergfeld: I would vote for Fitz.

Boidiva02: President Dalton from “Madam Secretary.” He is compassionate, intelligent and willing to break party ranks when needed. He’d especially get my vote if Elizabeth was his running mate.

Teridax: Best TV President in 2016? Kiefer Sutherland’s Tom Kirkland would get my vote.

Dish all reality TV with Hollywood insiders in our notorious forums

In terms of awards, who do voters tend to go for? Interestingly enough, Louis-Dreyfus has now won five Emmys for playing either the vice president or president on “Veep,” while none of the other actors mentioned above have Emmys for these roles. Also Emmy-less are former popular TV presidents like Jed Bartlet (Martin Sheen on “The West Wing”) and David Palmer (Dennis Haysbert on “24”).

However, “24” star Cherry Jones did win the Emmy in 2009 as Pres. Allison Taylor, while Geena Davis notably took home the Golden Globe for her role as the titular “Commander in Chief” (2005). Taking into consideration that Louis-Dreyfus, Jones and Davis have all taken home hardware for these roles, does that mean awards voters simply have a soft spot for female presidents?