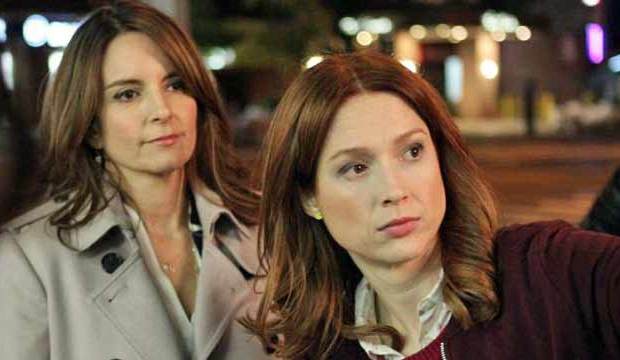 Courtesy of Universal Television and Netflix

The message of the first six episodes of the sophomore season of “Unbreakable Kimmy Schmidt” was to say “we’re not a network sitcom anymore” while the final half dozen take a decidedly different tone. They recognize the dramatic possibilities of Kimmy’s situation as a former cult member/prisoner and seizes upon it, all while still offering us lots of laughs.

Like many people, I was able to watch the first few segments as a binge and then had to catch up on the rest later. Read my original review and you’ll see that I was quite enthusiastic. Even so, I can’t believe how much better and different the back half of the season is. Let’s now take a look at the final episodes and their Emmy chances.

The seventh episode (“Kimmy Walks Into a Bar!”) begins innocuously enough with Kimmy (Ellie Kemper) stopping for a drink after yet another errand for Jacqueline (Tony Award winner and current nominee Jane Krakowski) when she meets a soldier (Samuel Page) with whom she just clicks. It soon becomes apparent, however, that Keith suffers from PTSD and that what he sees in Kimmy is a kindred spirit based on her experiences in the bunker. “Just because you’re out of it doesn’t mean that it’s out of you,” he wisely advises her. But Kimmy is still in denial phase and not as evolved in her handling of trauma as Keith is, so any relationship between them is not to be. Great stuff!

The back six episodes also highlight the increasingly tangled emotional relationship between Jacqueline and her society rival Deirdre Robespierre (hilarious Anna Camp), who begins to crave the drama between her and Jacqueline. When Jacqueline’s friend Mimi Kanasis (Amy Sedaris, daffy as always) accidentally schedules Jacqueline’s latest fundraiser on the same night as Deirdre’s, their rivalry and interdependency hits a new high. It’s surely a mere subplot to the series, but for this season it’s become a deliciously twisted one.

But the main arc of the final few installments focuses on Kimmy’s involvement with Angela (series co-creator Tina Fey), an alcoholic therapist whom Kimmy picks up during her stint as an Uber driver. Kimmy decides to become a patient, not because she believes she needs therapy, but because she feels it’s her mission to stop Andrea from day-drinking. Dr. Andrea is a character that is way out of Fey’s comfort zone. It’s one which we’ve never seen her play before, and however she did it, Fey knocks it out of the park. The eight-time Emmy winner is really, truly acting here (and not offering a variation of the Liz Lemon character from “30 Rock”), and voters might very well deem it to be Emmy-worthy.

Fey might have some competition from past Emmy champ Lisa Kudrow (“Friends’) who also plays against type as the long-lost mother of Kimmy in the season finale. The performance offers up plenty of chuckles, of course, but is also touching and provides an entirely different glimpse at the childhood of Kimmy. The finale also provides a brief glimpse at the imprisoned cult leader (Jon Hamm) in a major cliffhanger. It is very brief, so could Hamm actually achieve an Emmy nomination for essentially a cameo? Before you scoff, it worked for Margo Martindale (“The Americans”) last year and even brought her a victory.