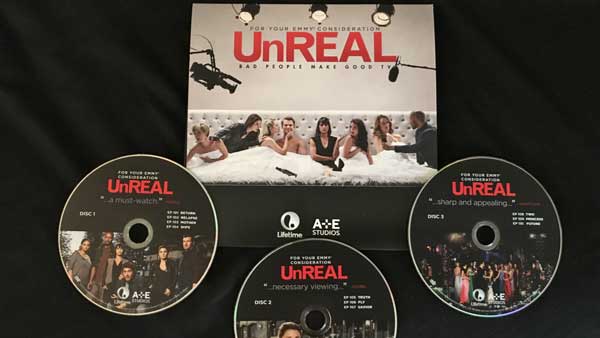 Lifetime and A+E Studios have officially jump-started this Emmy cycle by sending the full 10-episode season of their three-time Critics’ Choice nominee “UnReal” to members of the TV academy. The mailer also directs voters to Lifetime’s official For Your Consideration website to view episodes online if they wish.

Inside the FYC mailer, Lifetime plasters countless rave reviews from critics who praised the show when it aired last summer. In fact, this inaugural season of “UnReal” earned an impressive 98% at Rotten Tomatoes and a 78 score at Metacritic.

Here’s what’s included on each disc of Lifetime’s Emmy mailer:

Created by Marti Noxon (“Buffy the Vampire Slayer”) and Sarah Gertrude Shapiro (“The Bachelor”), “UnReal” details the manipulation that goes on in the reality television industry through the guise of a fictional dating show called “Everlasting.”

In our recent webchat with Constance Zimmer, the featured player reveals that she was “so excited” to be nominated at the Critics’ Choice Awards along with leading lady Shiri Appleby, and that finding out the show was nominated for Best Drama Series “meant even more to us than our individual nominations.”

Also in our webchat, Zimmer gives us an exciting tease about the upcoming second season that goes “darker and further than we went in Season 1.” Watch our entire interview below.

Do you think Zimmer will win at the Critics’ Choice Awards? Make your predictions beginning with Best Drama Supporting Actress to the right or at the bottom of this post.

You could win a $100 Amazon gift certificate, a place of honor on our leaderboard and a starring role in next year’s Top 24 Users (the two dozen folks who do the best predicting this year’s SAG winners). Be sure to read our contest rules.