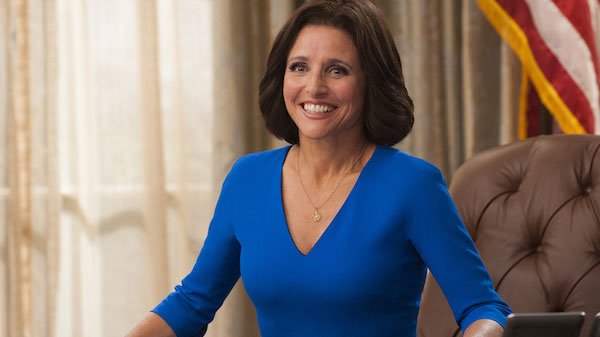 “Veep” won Best Comedy Series at last fall’s Emmys, keeping five-time champ “Modern Family” from setting the all-time record. This political satire just returned for a fifth season and the critics were rhapsodic in their raves. Julia Louis-Dreyfus has claimed the Best Comedy Actress Emmy for four years running and based on these reviews is a strong favorite to make it five in a row. Likewise, the show could pick up a bookend Emmy as well.

Ken Tucker (Yahoo): “Any fears that the departure of series creator Armando Iannucci would result in a diminishment of quality are immediately allayed. New showrunner David Mandel demonstrates a firm command and light touch in keeping the new episodes centered around Louis-Dreyfus and Selina’s bursts of anger, her deflations of despair, and her reactions to both the stupidity and shrewd mendacity of her staff.”

Hank Stuever (Washington Post): “Veep works because it is a compact ensemble comedy, filled with the sort of overheard details and wonk verisimilitude that has a way of making the show seem just real enough, even when it has played coy about whether its lead character is a Democrat or a Republican. In that way, it stands far apart from much of what passes for political comedy these days.”

Kevin P. Sullivan (Entertainment Weekly): “The show is at its manic best when a room is packed with loud, opinionated voices, all trying to be heard and protect their jobs; in season 5, the story pivots to bring the core group back together.”

Tim Goodman (The Hollywood Reporter): “Veep doesn’t just feel like it’s firing on all cylinders, it feels invigorated and out to prove something. And that’s potentially bad news for other comedies, but the best news for viewers.”

What did you think of the first episode of the fifth season? Did it look like an Emmy winner to you? Sound off below or jump into the fierce debate in our  forum, which is filled with TV industry insiders who post under screen names.