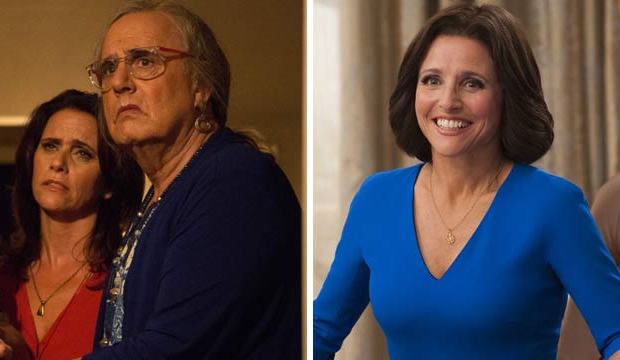 Courtesy of Amazon and HBO

With comedies sometimes competing in the same categories as dramas and Emmy-defined dramas like “Orange is the New Black” entered as comedies at other awardsfests, only 10 of this year’s trophies handed out by the 16 industry guilds and societies went to shows considered comedies at the Emmys (compared to a whopping 37 prizes for dramas).

Then again, the differing results could be the product of different balloting systems. Whereas the guilds conduct simple plurality votes, the Emmys have used preferential ballots. The latter system favored consensus-choices. Indeed, dramedies may be ranked low by those voters who oppose such fare being in contention for comedy prizes. But the Emmys are switching to a plurality-vote system this year.

The Producers Guild chose “Transparent” over “Veep” for Best Comedy Series, marking just the fifth time in the 15-year history of the award that it has gone to a dramedy instead of a traditional sitcom. The PGA awarded “Sex and the City”instead of Emmy champ “Will & Grace” in 2000, “Sex and the City” instead of “Everybody Loves Raymond” in 2003, “Entourage” instead of “Everybody Loves Raymond” in 2005 and “Orange is the New Black” instead of “Modern Family” in 2014. Under the new system at the Emmys, “Transparent” might emerge victorious even if it garners the same first-place votes as it got last year.

“Silicon Valley” was the only comedy besides “Transparent” and “Veep” to win multiple awards at last year’s Emmys (Best Editing and Best Production Design). But it lost the guild award for editing to sketch series “Inside Amy Schumer,” which competed in a separate category at the Emmys, and it lost the guild award for production design to new series “The Muppets,” which will compete for Emmys for the first time this year. “Silicon Valley” did not leave the guilds empty-handed, however, as it won a Writers Guild Award. It had lost the Emmy for Best Comedy Writing to “Veep,” but the Writers Guild was able to award both as it has multiple Best Comedy Writing categories: “Silicon Valley” took the episodic prize for “Sand Hill Shuffle,” while “Veep” took the overall Comedy Series prize.

Just as at the Emmys, the sole win for “Modern Family” this year was for Best Sound Mixing. The other three Best Comedy Series Emmy nominees — “Louie,” “Parks and Recreation” and “Unbreakable Kimmy Schmidt��� — were shut out. (“Louie” will not contend for Emmys this year, as it is on an indefinite hiatus; “Parks and Recreation” was nominated for its final season last year.)

And “The Big Bang Theory” claimed a single award in a category designated specifically for multi-camera programming as it had at the Emmys. At the Emmys it won Best Editing, while at the guilds it claimed Best Production Design.