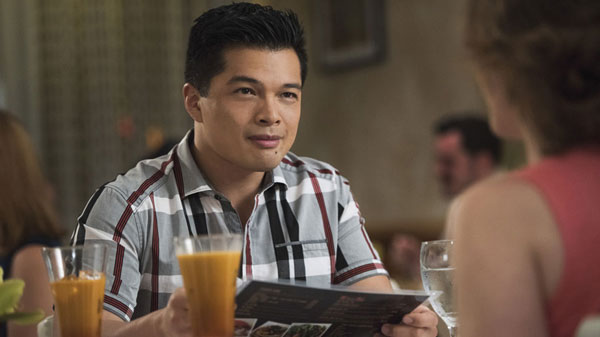 “Josh is an idea, of following a time when you were happy. That’s what’s really happening here,” explains actor Vincent Rodriguez III as we chat via webcam (watch below) about his breakthrough role on the critically acclaimed CW musical comedy “Crazy Ex-Girlfriend.” Rebecca Bunch (co-creator Rachel Bloom) impulsively quits her high paying job as a lawyer in New York City after bumping intoJosh Chan (Rodriguez), her first love from summer camp. She moves across the country to suburban West Covina, California where Josh now lives.

While the actor has relished playing the object of Rebecca’s affection, he says the premise is not as simple as that. “You hear people say Rebecca is crazy and is doing something crazy by following Josh, but really, when you look at what she came from, you have to ask yourself, how crazy is it really?” Rodriguez asks. “What’s crazy is the opposite!”

As he explains, “Rebecca says to herself ‘I want to be happy!’ in a [New York City] alleyway, trying to open up a bottle of pills and having an anxiety attack because she’s about to get promoted. This is what gets fed on television; once you hit that level, you’re done, you’re happy, that’s it. But that’s not what we trying to tell you on ‘Crazy Ex-Girlfriend.’

Instead, the message of the show is to follow that which makes you happy. “People look at it as a crazy grand gesture or maybe it’s someone seeing very clearly: ‘I’m unhappy and I need to be happy and he is the last time I was happy.’ Through Josh, and her idea of Josh, Rebecca will find her own individual happiness and her own peace.”

Rodriguez welcomes the fact that this role both raises his profile and shines a light on the Asian-American experience in a way that few other TV series have done. “I was excited about working on a musical comedy, and role of Josh Chan felt really close to me,” he admits. “It’s a real honor to play Josh Chan, a Filipino ‘Asian bro’ on network television and represent Filipino culture.”

The issue of diversity on television is a topic often raised with the actor, and he has his own theories on the subject. “I wonder how many Asian executive producers there are? How many Asian head writers? Showrunners? Casting directors? I don’t see many,” he observes. “We’re not encouraged to be here. There’s not enough of us, and there’s also not enough roles written for us, but again that goes back to, who’s writing the scripts?”