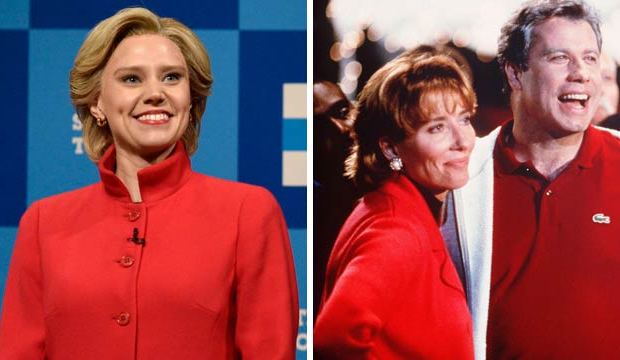 Democratic presidential candidate Hillary Clinton is already one of the most famous politicians in modern American history, and on November 8 voters decide whether she will make history as the nation’s first female president. But she fascinated pop culture aficionados long before she was within striking distance of the Oval Office. Which actor do you think played her best?

Of course some of the most famous portrayals of Clinton came from the political parodies of NBC’s late-night sketch comedy “Saturday Night Live.” The satirical Hillary was first introduced by “SNL” cast member Jan Hooks, who played her alongside Phil Hartman as President Bill Clinton. Over the course of the first Clinton administration other actors stepped into the role, including Janeane Garofalo and Ana Gasteyer.

After Bill left office and Hillary began to pursue her own political ambitions, Amy Poehler assumed the role on “SNL,” playing her for longer than any other actor to date: 2003 to 2008, with additional guest appearances in 2012 and 2015. But the only actor to win an Emmy for playing Hillary on “SNL” is her current portrayer, Kate McKinnon, who took over the role full-time in 2015 and won Best Comedy Supporting Actress for her efforts in 2016.

But Hillary hasn’t just been played by comedians over the years. In 1998 Emma Thompson played Susan Stanton, a thinly veiled version of Hillary in the film “Primary Colors,” which was based on an anonymously written novel later revealed to be authored by journalist Joe Klein, who had covered the Clinton presidential campaign.

Then in 2010 HBO produced the film “The Special Relationship,” which explores the political alliance between Bill Clinton (Dennis Quaid) and British Prime Minister Tony Blair (Michael Sheen). In that film Hillary was played by Hope Davis, who earned an Emmy nomination for Best Movie/Mini Actress.

So who do you think has been the best Hillary? Vote in our poll below.

These 4 actors are chasing this elusive Emmy hat trick

Cecily Strong poised to pull off double Emmy nominations for 'SNL' and 'Schmigadoon!'