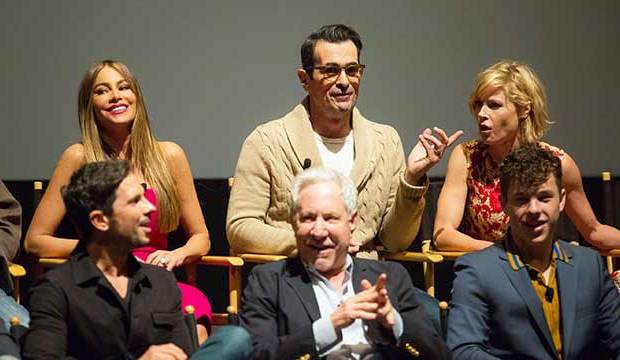 With their seventh season finale airing this month, the cast and creators of “Modern Family” celebrated with prospective Emmy Awards voters on Monday night. Gold Derby was on the red carpet on the Fox Studios backlot and interviewed nine of the people attending, including Julie Bowen, Ty Burrell, and Eric Stonestreet.

The long-running ABC program holds the all-time Emmy record with five victories as Best Comedy Series (2010-2014) in a tie with “Frasier.” The focus of the show is on the Pritchett family, with patriarch Jay (Ed O’Neill) and his second wife Gloria (Sofia Vergara) along with his adult children Claire (Bowen) and Mitchell (Jesse Tyler Ferguson). Respectively, they are married to Phil Dunphy (Burrell) and Cam Tucker (Stonestreet). All six of those actors have been Emmy nominees, with Bowen, Burrell, and Stonestreet winning two each.

All mentioned above were in attendance on Monday except for Ferguson, who is currently starring on Broadway in “Fully Committed.” The actors playing their children were also there except for Sarah Hyland (Haley Dunphy), who was out of town.

Click any name below to watch a short red carpet video recorded before the event: