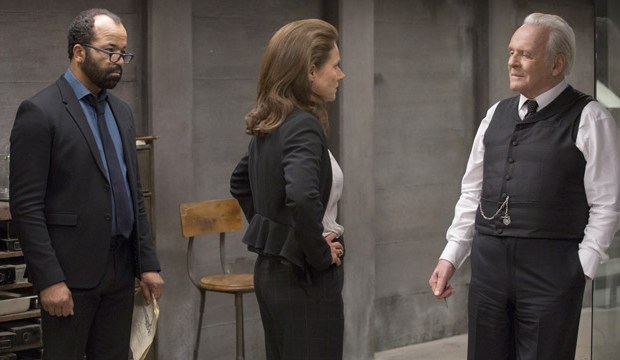 HBO delivered the most shocking episode of “Westworld” yet with its seventh hour, titled “Trompe L’oeil.” If Syfy’s modern classic “Battlestar Galactica” taught me anything, it is to always search for the hidden cylon. If you have been keeping up with these recaps, you know that loveable Bernard (Jeffrey Wright) has been setting off my “cylon sense” since episode 3. In a heartbreaking reveal, the popular fan theory was proved correct. What does Bernard’s robotic identity mean for the rest of the series? Let’s take a look at the biggest questions “Westworld” left us with in Season 1, Episode 7.

Delos’ larger goal — In a confrontation with Theresa (Sidse Babett Knudsen), Charlotte (Tessa Thompson) reveals that the data gained from the satellite uplinks are a contingency plan in case Ford were ever to wipe Westworld’s hardware. According to Charlotte, Delos cares more for their “little research project” than the hosts. The specifics of this project are unclear, but it could be related to advanced AI.

Dolores is the key — On the train, William (Jimmi Simpson) tells Dolores (Evan Rachel Wood), “You’ve unlocked something in me.” To which she replies, “I’m not a key William, I’m just me.” Perhaps it’s a throwaway line, but the specific use of the word “key” could hold some meaning. Perhaps it relates to the painting Dolores created, of scenery she saw in a dream. Does the painting depict the location of the maze?

An android named Bernard — As soon as Bernard asked, “What door?” millions of “Westworld” fans gasped as one. Not only is Bernard a host, but he is under the direct control of Ford. Unfortunately, Theresa doesn’t put this together until she sees a schematic for Bernard’s prototype. Ford emerges from the shadows and orders Bernard (himself unaware of his robot status up until now) to unwittingly murder poor Theresa. That was shocking enough, but this reveal means that any information Bernard received was also intercepted by Ford. That doesn’t bode well for MIA Elsie Hughes (Shannon Woodward).

New hosts — Theresa is definitely dead, but that doesn’t mean we’ve seen the last of actress Sidse Babett Knudsen. Given that Ford repeats Charlotte’s line about the gods requiring “a blood sacrifice,” does that indicate Charlotte is also one of his hosts? There is a new host being created in the room where Theresa is murdered, and it’s possible that Ford is creating a robotic version of Theresa in order to cover up her death. Perhaps he previously pulled the same trick with Charlotte.

Three timelines? — Most fans accept that we are watching two separate timelines — one with William and Dolores roughly 30 years ago, the other featuring the Man in Black (Ed Harris) in present day. But could a third timeline be hiding in plain sight? The diagnostics facility where Bernard murders Theresa looks awfully similar to the room in which he interviews Dolores. Bernard mentions that this room was used when the park was in beta. If one buys the theory that Bernard is a robot version of Arnold, the interview scenes with Dolores could be a third timeline where Arnold (who would still look like Jeffrey Wright to us viewers) first explores robotic consciousness about 35 years ago.