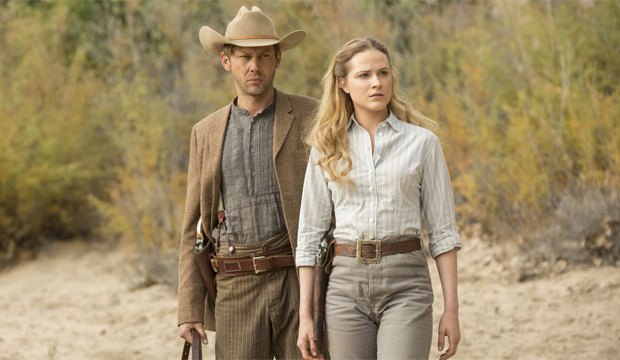 At one point in the eighth episode of “Westworld,” titled “Trace Decay,” a distraught Dolores (Evan Rachel Wood) begs the question, “When are we?” The audience was likely asking the same thing. As we speed toward the conclusion of Season 1, this episode rapidly flashes through different timelines and forces viewers to question everything they see. For starters, Dolores may not be the main character like everyone assumed, as all signs point to Maeve (Thandie Newton) being the center of everything. Here are five puzzling mysteries from “Trace Decay” to keep “Westworld” fans guessing until next week:

Bernard’s secrets — Ford (Anthony Hopkins) reveals that Bernard (Jeffrey Wright) was his own special creation. Together Bernard and Ford attempted to give each host a sense of “heart.” Ford draws several parallels between Bernard and Arnold, furthering speculation that Arnold’s consciousness may have found a way inside Bernard’s coding. We also get a glimpse of the missing Elsie (Shannon Woodward) when Bernard relives the memory of grabbing her. Did he clean up all traces of her murder as he did with Theresa, or is Elsie still alive somewhere in Westworld?

Fail safe — Maeve discovers a major roadblock in her escape plan: all hosts have an explosive embedded in their spine, which will detonate if they leave the park. “You’d need an army to get out of here,” remarks Sylvester (Ptolemy Slocum). Fitting then, that Charlotte (Tessa Thompson) enters cold storage where an army of hosts sit idle. Charlotte uploads 35 years of data to the decommissioned Abernathy, and demands a story that sends the host outside of the park. It seems like the pieces for Maeve’s robot revolution are waiting for her to find them.

Dolores’ critical failure — Dolores and William (Jimmi Simpson) finally reach the town with the white church. Her mind flashes to a past memory, where the town is used as a behavior training ground for hosts. Maeve is there as well as the blonde host who welcomed William to the park. She watches in horror as her past self systematically shoots all the hosts in the area before bringing the gun to her own head. If Dolores once came close to destroying everyone in the park, is this memory the critical failure from 30 years ago?

“Two minds” — Maeve claims there are “two minds arguing” inside her head. “There are things in me,” she says, “things I was designed to do.” The “two minds” could simply be past builds, but Maeve pointedly asks, “Who is Arnold?” It’s possible Arnold is the voice in her head, guiding her toward sentience. But if Dolores was the one to “wake up” Maeve, and if Arnold had previously designed Dolores to destroy Westworld, could the other mind in Maeve’s head be Dolores? The show leads viewers to believe that Dolores is at the center of the Maze mystery but perhaps it’s Maeve we should focus on.

Maeve’s Maze — The Man in Black (Ed Harris) reveals that he previously chose Maeve and her daughter as a “test” for himself; would he feel anything by murdering a pair of innocents? After he shoots her daughter, Maeve is able to slash his throat and carry the girl outside. She collapses on the ground in the middle of a giant version of the Maze symbol. This sets the Man in Black then on his years-long pursuit, but of Maeve he states, “She was truly alive, if only for a moment.” Perhaps Maeve achieved consciousness on her own and is the one responsible for finding the center of the Maze, after Dolores previously failed to do so.