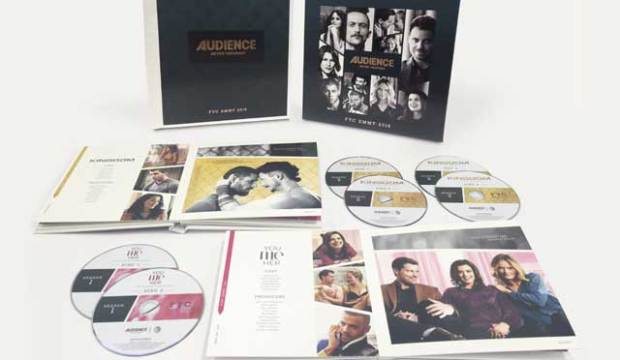 DirecTV’s Audience Network just made a bold strategic shipment to Emmy voters: DVDs containing all 10 episodes of each series competing for kudos — controversial comedy “You Me Her” and mixed-martial arts drama “Kingdom.”

Often contending networks will ship only a few episodes, but Audience not only chose to be generous, but it mailed both complete series to all 18,000 members of the Television Academy.

‘You Me Her’: Secrets behind its bold Emmy campaign

That same strategy worked well for DirecTV in 2011 when the network sent DVDs of the full final season of “Friday Night Lights” to all voters, resulting in the program’s first-ever nomination for Best Drama Series, plus a bid for Connie Britton (Best Actress) and wins for Kyle Chandler (Best Actor) and bids for acting and writing. But that was an established TV series that had a history of Emmy recognition and it was co-telecast by NBC. Audience Network is going it solo with “You Me Her” and “Kingdom.”

“You Me Her” follows Jack (Greg Poehler) and Emma (Rachel Blanchard), a suburban married couple whose relationship is stuck in a rut. They fall for Izzy (Priscilla Faia), a college student making extra money as an escort, and they realize that this curious romantic twist may not really be a threat to their marriage. Instead, it may strengthen it.

‘You Me Her’: DirecTV brings polyamorous rom-com directly to SAG & Emmy voters in NYC (Podcast)

“Kingdom” stars Frank Grillo as the operater of a mixed martial arts gym who helps people work out and trains fighters, including his troubled sons (Nick Jonas, Jonathan Tucker).