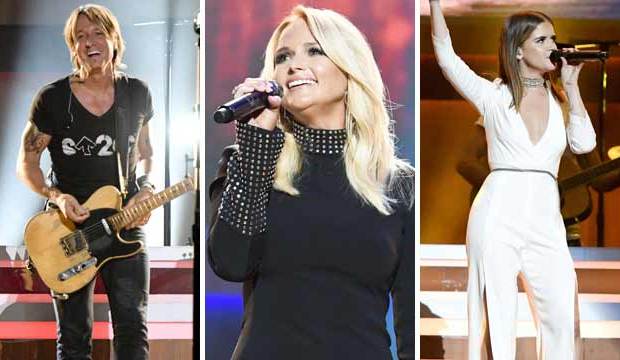 Keith Urban came out on top when the 2017 Academy of Country Music Award nominations were announced on Thursday, February 16. He’s nominated seven times, more than any other artist. See the complete list of nominees here.

ACM mainstay Miranda Lambert and newcomer Maren Morris are next with six nominations apiece. Lambert contends for Female Vocalist of the Year and is the seven-time defending champion in that category. She’s also in the running for Album of the Year for “The Weight of These Wings,” and her song “Vice” is up for Single Record, Song and Video of the Year. In the Song of the Year race she has dual nominations as both artist and songwriter.

Dish the ACM Awards with Hollywood insiders in our notorious forums

Florida Georgia Line have five nominations, including their second for Entertainer of the Year. Their other four noms are Vocal Duo of the Year, which they’ve won three years running, Album of the Year (“Dig Your Roots”), Single Record of the Year (“H.O.L.Y.”) and Vocal Event of the Year (“May We All” with Tim McGraw).

McGraw also has five bids. In addition to Vocal Event with Florida Georgia Line, his song “Humble and Kind” is nominated in three categories: Single Record, Song and Video of the Year. In the Single Record category McGraw has dual nominations as artist and producer.

The ACM Awards winners will be announced on Sunday, April 2, during a live ceremony at the T-Mobile Arena in Las Vegas, Nevada, that will be hosted once again by Luke Bryan and Dierks Bentley, both nominees themselves.