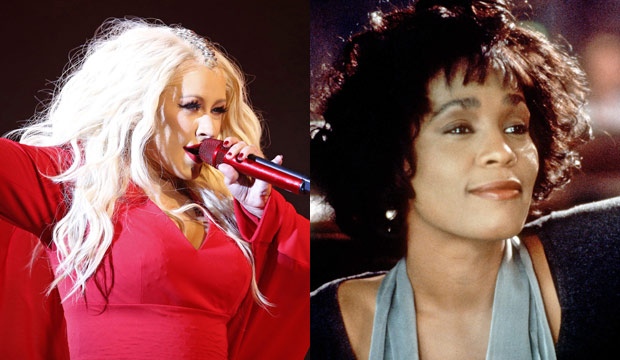 The 2017 American Music Awards air live on Sunday, Nov. 19 from the Microsoft Theater in Los Angeles and one of the most anticipated performances of the evening is Christina Aguilera‘s tribute to her late idol and mentor, Whitney Houston. Aguilera is slated to sing a medley of songs from “The Bodyguard,” the film that launched the best-selling soundtrack of all time and Houston’s biggest hit, “I Will Always Love You.” That album was recently certified 18x Platinum by the RIAA and a special 25th anniversary edition titled “I Wish You Love: More From the Bodyguard” was released on November 17.

This won’t be the first time Aguilera has paid homage to the legendary diva known as “The Voice.” In 2001 she performed “Run To You” at the BET Awards when Houston took home the Lifetime Achievement Award. Houston jokingly remarked following that performance, “You’ve done the best rendition of ‘Run to You,’ besides myself.” She also teamed up with Britney Spears at the 2000 MTV Video Music Awards to introduce Houston as a presenter. Aguilera has cited Houston as one of her greatest influences and even sang another “Bodyguard” hit, “I Have Nothing,” at just 12 years old on “The Mickey Mouse Club.”

In 1994 Houston took home eight AMAs for “The Bodyguard Soundtrack,” tying Michael Jackson’s record for the most wins in a single year. Earlier that evening she opened the ceremony with a tour-de-force medley of “I Loves You Porgy/And I Am Telling You I’m Not Going/I Have Nothing.” The spellbinding performance left the audience awe-struck as they leapt to their feet less than halfway through the 10-minute set and remained standing for the duration. Houston is the all-time leader for AMA wins among female artists with 22 total, including a special International Artist Award she received in 2009.

Can Christina Aguilera do these legendary songs justice? What Whitney Houston hit would you like to hear Aguilera sing the most? Sound off in the comments!