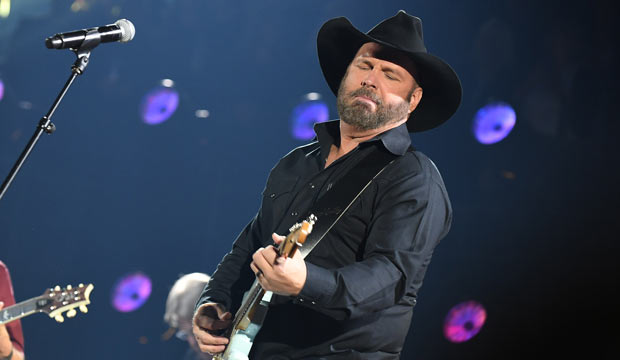 For the second year in a row Garth Brooks won Entertainer of the Year at the Country Music Association Awards, defeating close rival Luke Bryan, who had won it in 2014 and 2015. This was Brooks’s sixth win overall, and we probably should have seen it coming since his victories have all come in pairs. His first two wins were consecutive in 1991 and 1992. Then he went back-to-back again in 1997 and 1998. Now he has claimed it in 2016 and 2017, so his awards in this category now span more than a quarter century. Check out the complete list of CMA winners here.

Elsewhere the CMAs spread the wealth, with no artist taking home more than two prizes. Chris Stapleton won Album of the Year for “From A Room: Volume 1,” overtaking presumed frontrunner Miranda Lambert (“The Weight of These Wings”). Stapleton previously won that award two years ago for his breakthrough album “Traveller,” which was subsequently nominated for a Grammy for Album of the Year. Stapleton also prevailed for Male Vocalist of the Year for the third year in a row.

But it wasn’t all bad news for Lambert. She made history by winning Female Vocalist of the Year for the seventh time, which extends her record for the most victories in that category.

Brothers Osborne went undefeated on CMAs night, claiming both awards they were up for: Music Video of the Year for “It Ain’t My Fault” and Vocal Duo of the Year for the second year in a row.

Keith Urban surprised us by winning Single of the Year for “Blue Ain’t Your Color.” He upset the odds-on favorite, Sam Hunt for “Body Like a Back Road.”

Taylor Swift took Song of the Year for writing “Better Man” for the quartet Little Big Town. Perhaps surprisingly, this was Swift’s first CMA victory for songwriting, though she did win Entertainer of the Year twice (2009, 2011) before her big pop music crossover. Then later in the evening Little Big Town won an award of their own, taking Vocal Group of the Year for the sixth year in a row.

And Glen Campbell was a posthumous winner for Musical Event of the Year for “Funny How Time Slips Away” with Willie Nelson. The legendary musician hadn’t won at the CMAs since 1968. He died on August 8 after battling Alzheimer’s disease.