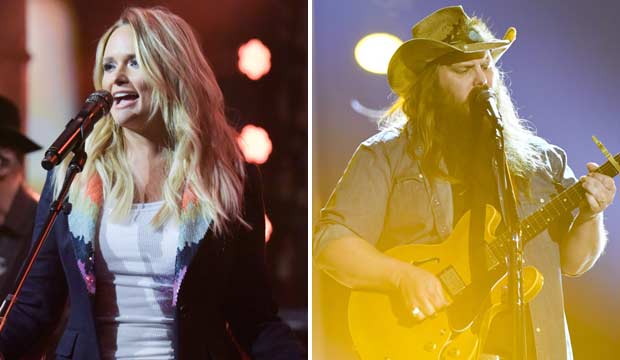 The 2017 CMA Award for Album of the Year comes down to two past winners according to our latest predictions: Miranda Lambert (“The Weight of These Wings”) or Chris Stapleton (“From A Room: Volume 1”). With the awards only days away on November 8, Lambert has the lead, but this wouldn’t be the first time Stapleton surprised us.

As of this writing Lambert gets leading odds of 5/6. That’s based on the combined support of all of the hundreds of users making their predictions at Gold Derby, but she’s looking especially strong when you consider the forecasts of our most elite users. She’s backed by 21 of our Top 24 Users, who got the highest scores predicting last year’s CMAs. She’s also out front according to 20 of our All-Star Top 24, who had the highest scores when you combine the last two years’ predictions. That’s a fairly strong consensus.

This is Lambert’s fourth nomination in the category, and it would be her third win, following victories for “Revolution” (2010) and “Platinum” (2014). The only time she has lost thus far was for “Four the Record” in 2012; that award went to Eric Church for “Chief.” It doesn’t hurt that “The Weight of These Wings” is an epic two-disc set that earned critical acclaim and already won her the ACM Award for Album of the Year earlier this year.

But Stapleton is a potential dark horse with 3/1 odds. Three of our Top 24 and three All-Stars think he’ll upset. “From A Room” was also critically acclaimed, and it’s his followup to “Traveller,” with which Stapleton exploded onto the scene in 2015, unexpectedly sweeping the CMAs including a victory in this category. Stapleton doesn’t have as many nominations overall this year — three total, compared to five for Lambert — but Stapleton has one thing Lambert doesn’t have: an Entertainer of the Year bid. Does that mean Stapleton has more support across the board from the Country Music Association?