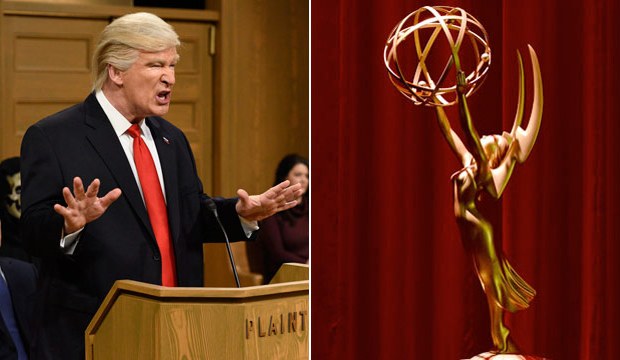 Will Heath/NBC and Stewart Cook/Variety/REX/Shutterstock

When the 2017 Emmy ballot is unveiled on June 12, don’t be surprised if you see some well-known contenders in unexpected places. Alec Baldwin, for example, was a guest star throughout this season of “Saturday Night Live” but he’ll actually be on the ballot in the supporting category. Former CW series “Gilmore Girls” was revived by Netflix as “Gilmore Girls: A Year in the Life” and has submitted in the limited series race — not comedy or drama. And two of TV’s buzziest dramas, “Game of Thrones” and “Outlander,” will not be eligible at all. Scroll down to see the Top 7 bombshells to look for in the 2017 Emmy ballot.

Alec Baldwin (“SNL”) — As Gold Derby reported exclusively, Donald Trump impersonator Baldwin appeared in more than 50% of the “Saturday Night Live” episodes this season, so he can no longer compete in the guest category and must instead try his luck in the race for Best Comedy Supporting Actor.

“Gilmore Girls: A Year in the Life” — The TV academy accepted the petition by producers of Netflix’s “Gilmore Girls” revival to consider these four 90-minute telefilms as a limited series. Will the new Emmy strategy pay off? Don’t forget, the original “Gilmore Girls” won an Emmy for Best Non-Prosthetic Makeup (2004).

“Game of Thrones” & “Outlander” — TV’s biggest scripted Emmy winner of all time, “Game of Thrones” with 38 victories, will not be on the ballot this year because it didn’t air within the eligibility period. The same goes for “Outlander,” which has earned three nominations so far. “GoT” returns to HBO on July 16, while “Outlander” will continue on Starz this September.

Shailene Woodley (“Big Little Lies”) — HBO exclusively revealed to Gold Derby that “Big Little Lies” star Woodley will compete in the Best Movie/Mini Supporting Actress race — not in the lead category where she would have faced off against co-stars Reese Witherspoon and Nicole Kidman.

Allison Janney (“Mom”) — After contending at the Emmys in supporting for the first three seasons of CBS’s “Mom” (and winning twice), Janney is jumping up to lead this year. Janney made a similar move back in “The West Wing” days and it paid off — she won twice in supporting and twice more in lead.

Margo Martindale (“The Americans”) — After winning back-to-back guest Emmys as KGB handler Claudia on FX’s “The Americans,” Martindale will now try her luck in the supporting race, Gold Derby has learned exclusively. Martindale previously prevailed in supporting for her memorable one-season stint on “Justified” (2011).

Tatiana Maslany (“Orphan Black”) — Reigning Best Drama Actress champ Maslany will not be eligible to compete at the 2017 Emmy Awards, as BBC America decided to hold “Orphan Black” until June 10, and that’s too late for this year’s awards cycle. Who do you think will replace her in the Emmy lineup?