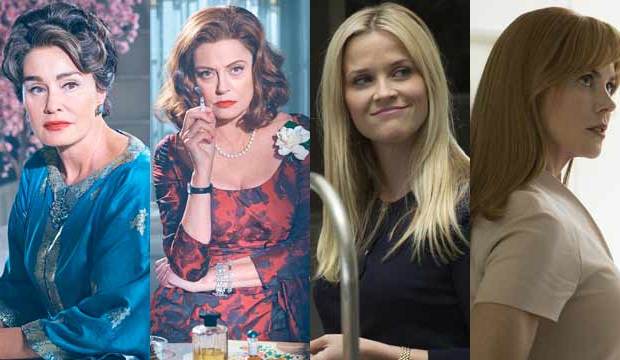 The TV academy introduced a new method of voting for the Emmy Awards nominations this year. Members of each branch were directed to vote for as many contenders as they deemed worthy of a nomination in each category. In the past, they had been restricted to a specific number of choices (usually 10).

Allowing voters to select all those performances that they enjoyed resulted in an unprecedented number of categories in which co-stars compete. All four of the acting races in the combined TV movie/limited series genre include at least one set of co-stars. In comedy, five of the six categories pit performers from the same show against each other; the exception is Comedy Actor. And in drama, three of the six races include dueling bids by cast mates. (Check out the complete list of nominees to see if your favorites made the cut.)

The most high profile of these contests in which co-stars compete is Best TV Movie/Limited Series Actress. Two pairs of Oscar winners are vying for this prize: Jessica Lange and Susan Sarandon who portray dueling divas on “Feud: Bette and Joan” and Nicole Kidman and Reese Witherspoon who play besties on “Big Little Lies.”

Best Drama Actor
Sterling K. Brown vs. Milo Ventimiglia (“This Is Us”)

Best Drama Guest Actor
Bryan Tyree Henry vs. Gerald McRaney vs. Denis O’Hare (“This Is Us”)