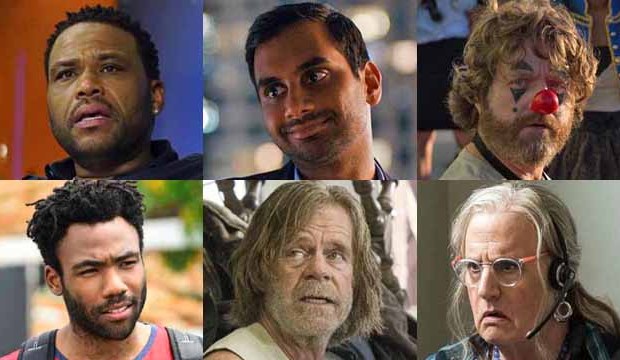 Jeffrey Tambor (“Transparent“) is the reigning two-time Comedy Actor Emmy winner for his groundbreaking role as a transgender woman in the Amazon dramedy. While eight men have won three or more Emmys in this race, no one has won that many in a row since Michael J. Fox (“Family Ties”) did so from 1986-1988. “Transparent” does have seven nominations this year, including supporting bids for Kathryn Hahn and Judith Light, so we know the actors branch of the TV academy still supports the show.

Tambor faces a strong challenge from first-time nominee Donald Glover for the freshman comedy “Atlanta.” And this isn’t just the first nomination for Glover — it’s the first four nominations for Glover, who also contends for writing, directing, and producing the FX series. And unlike “Transparent,” “Atlanta” earned a nomination for Best Comedy Series, which could be a sign of strength for him in this contest.

Aziz Ansari (“Master of None“) is also nominated multiple times this year. In addition to this category, he’s also in the running for Best Comedy Writing and Best Comedy Series. In just two years he has accumulated seven nominations, but he has yet to win for acting in his Netflix series.

William H. Macy (“Shameless“) has the most extensive Emmy track record in this category with 13 career nominations across acting, writing, and producing categories. He previously won for writing and acting in the telefilm “Door to Door”‘ in 2003. This is his fourth straight nomination in this category for “Shameless,” but he has yet to win for it. However, he did win his second SAG Award for the role earlier this year, indicating he has the support of his fellow actors in the industry.

Anthony Anderson (“Black-ish“) has been nominated five times in the last three years: twice for Best Comedy Series as a producer of the ABC sitcom, and three times in this category for his lead performance. He has yet to win, but he did pick up breakthrough nominations at the Golden Globes and SAG Awards earlier this year, so he and the show are on the rise.

Zach Galifianakis (“Baskets“) was a surprise nominee, but don’t count him out. This is his first nomination for his role as dysfunctional twin brothers on the FX series, but his on-screen mom Louie Anderson won in the supporting category last year, and Galifianakis has been nominated five times overall, winning Best Short-Format Entertainment Program twice for “Between Two Ferns” (2014-2015).