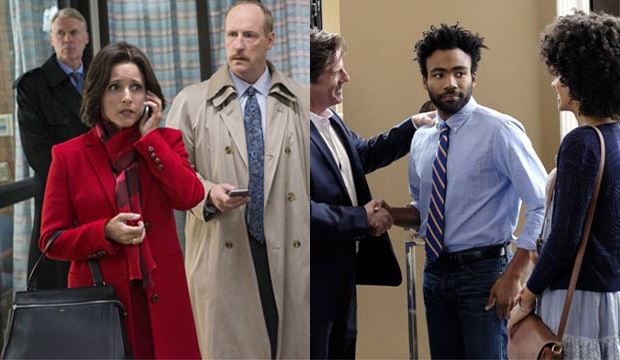 “Veep” has won Best Comedy Series at the Emmy Awards for two years running and we are predicting that it will keep this streak alive this year. After all, the same comedies often get the last laugh for a few years running at these top TV honors. Indeed, in the last decade only three shows have won Best Comedy Series: “30 Rock” (2007-2009), “Modern Family” (2010-2014) and now “Veep.” HBO’s hit political satire reaped 17 Emmy nominations this year. That is the most of its six-year run and far more than any of its six competitors for Best Comedy Series.

While “Veep” has the lead among the Best Comedy Series contenders, the FX freshman series “Atlanta” poses a serious threat. The critically acclaimed show broke through with six nominations and contends in the key races needed to be a viable series winner: acting, writing and directing bids for Donald Glover as well as casting. But will the more conservative members of the TV academy relate to a show about hip-hop?

“Silicon Valley,” which is the lead-in to “Veep,” is also a major threat. Like “Veep” it keeps increasing its number of nominations every year. For its fourth season, it had its best showing yet with 10 bids, including nominations for writing, directing, editing and casting. However, none of the show’s actors made the cut this year.

Netflix’s “Master of None” has eight bids — double its total from last year, which bodes well for the sophomore show. It missed out on a directing nom this time, but it contends for writing, editing, casting, and acting for Aziz Ansari‘s lead performance and Angela Bassett‘s guest role.

Another Netflix show, “Unbreakable Kimmy Schmidt,” picked up five nominations for its third season. While that is one more than last year, it still lacks recognition for its writers or directors. No show has won Best Comedy without a writing or directing nomination since “Friends” in 2002.

ABC’s “Black-ish” also ticked up in the nominations to four for season three; that is one more than last year. But it too lacks nominations for writing and directing. It’s lead-in, “Modern Family,” trails with three nominations for its eighth season. In addition to Best Comedy Series, the show earned bids for supporting actor Ty Burrell and sound mixing.