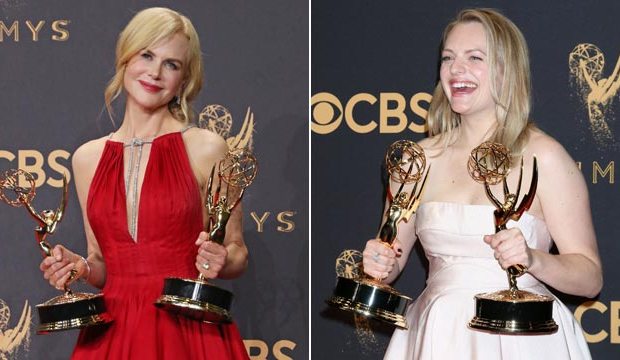 Multiple nominees at the 2017 Emmy Awards walked away with not one but two trophies Sunday night, proving that when they like you, they really like you. Talk about Emmys overkill. Below, see the names of many of this year’s nominees who received two Emmys for their work in the 2016-2017 TV season, including Nicole Kidman (“Big Little Lies”) and Elisabeth Moss (“The Handmaid’s Tale”), who both won for acting and producing. (See complete list of Emmy winners.)

This is the second consecutive year of winning double Emmys for Carvell, Corden, and Oliver, and the third year in a row for Burnett and Louis-Dreyfus.

There were a number of notable double nominees this year that went home empty-handed at the Emmys telecast, including Anthony Anderson (“black-ish”), Robert De Niro (“The Wizard of Lies”), Bob Odenkirk (“Better Call Saul”), Jessica Lange and Susan Sarandon (“Feud: Bette and Joan”), Kevin Spacey and Robin Wright (“House of Cards”), Samantha Bee and the team from “Full Frontal,” and Stephen Colbert and the team from “The Late Show.”

The biggest also-ran at the Primetime ceremony was Ryan Murphy, who did not win for any of his four “Feud” nominations, followed by Noah Hawley (“Fargo”), Jonathan Nolan (“Westworld”) and The Duffer Brothers (“Stranger Things”), who lost all three of their Emmys.