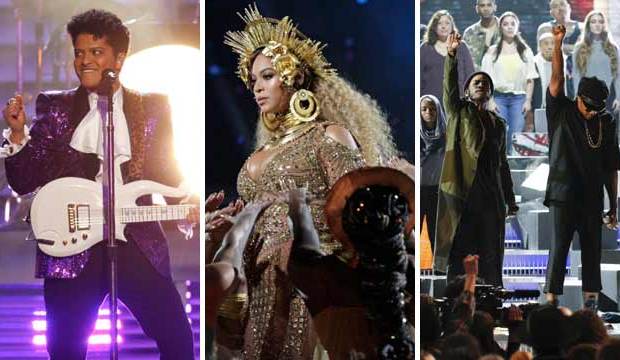 The Grammys sure do love their “Moments”: the mash-ups, medleys, and quirky collaborations you can only see at the Grammys, one of the few music venues to invite artists ranging from country to rap to rock onto the same stage. So why not take advantage of the eclectic lineup? The Grammys usually oversell that promise — the prepackaged “Moments” disappoint as often as not — but this year there were hardly any outright bad performances, and a few downright great ones.

2017 Grammy Awards: Full list of winners in all 84 categories

The night began with a solid performance by first-time host James Corden, who performed a bit in which a technical malfunction sent him tumbling down a flight of stairs. He got up and angrily halted the “disaster” of an opening — anyone who saw Corden’s Tony winning performance in “One Man, Two Guvnors” knows that exasperated is Corden’s funniest mode — and the night was off to a solid start.

Corden was a more hands-on host than previous emcee LL Cool J, who was always more or less content to direct traffic on the crowded Grammy stage, but Corden is a showman at heart. The Grammys aren’t necessarily the best outlet for that showmanship — it doesn’t have the same familial feel as the Tonys, which Corden hosted last summer — but it was nevertheless a solid hosting gig, despite a couple of speed bumps. At one point he tried to do a mock “Carpool Karaoke” segment with a bunch of celebs including Faith Hill, John Legend, and Neil Diamond singing Diamond’s “Sweet Caroline,” but the bit couldn’t survive the palpable awkwardness of the fact that Diamond and Corden were the only two who knew the words.

But the performances were the main event, so much so that I wish the main telecast had adopted the format of the online Premiere Ceremony that preceded it. They should have just given out those last nine awards out in the first 10 minutes (yes, there were only nine awards handed out during the entire telecast) and let the rest of the ceremony be the pure music festival it clearly wanted to be. Then again, maybe Beyonce wouldn’t have stuck around for her stellar performance if she’d already known she’d lost Album of the Year to Adele.

On most other nights that Beyonce performance — a highly elaborate, conceptual extravaganza in which she sang “Love Drought” and “Sandcastles” — would have been the moment of the night. In fact, it felt like a thematic bookend to her 15-minute medley at the 2016 VMAs — that performance was all righteous anger, while this one was full of redemption and reconciliation, following the same arc as her album “Lemonade.” “If we’re gonna heal, let it be glorious,” she said at the end of her performance.

Okay everybody, pack it up — Beyonce wins music, so the rest of you can go home. That was true at the VMAs, where she drastically outclassed the rest of the musical acts, but she wasn’t the only showstopper at the Grammys. Just as good — maybe even better — was the Prince tribute by Bruno Mars and The Time. Mars owes much of his career and his persona to predecessors like Prince and Michael Jackson, but the way he channeled Prince on “Let’s Go Crazy” confirmed him as a musical successor to those greats, not just an imitator.

Then there was the angry, politically righteous performance by A Tribe Called Quest, Anderson Paak and Busta Rhymes, who called President Donald Trump “President Agent Orange” and railed against his racism and proposed border wall. Chance the Rapper also brought the house down with a gospel-infused rendition of “How Great” and “All We Got” with Kirk Franklin and Tamela Mann.

Adele excelled not once, but twice. She opened the show with “Hello,” and then she paid tribute to the late George Michael by singing a solemn, stripped-down version of “Fastlove,” his uptempo ode to casual sex. It was an unusual approach, and decidedly more somber than the energetic tribute to Prince. It also got off to a rough start, with Adele abruptly stopping the performance after the first verse to start over, but it was undeniably moving and impeccably sung.

Those performances made it easier to forget some of the less successful numbers. The Bee Gees tribute, in honor of the 40th anniversary of “Saturday Night Fever” seemed ill-conceived from the start, gathering stylistically dissimilar artists Demi Lovato, Tori Kelly, Andra Day and Little Big Town to perform the famed group’s hits as if they were pulled randomly out of a hat. The singers mostly did fine, but the medley didn’t resonate.

Then there was Katy Perry, who performed her new single “Chained to the Rhythm,” which aimed at political commentary but lacked the urgency of A Tribe Called Quest, and the US Constitution projected onto the stage at the end felt tacked-on.

Metallica and Lady Gaga, a strange duet I was eagerly anticipating, was solid despite a malfunctioning microphone for Metallica singer James Hetfield. But on a night when other artists felt fully at ease on stage, Gaga seemed to be playing a new version of herself that she hadn’t quite worn in yet. You could sense the effort.

But it’s hard to come up with much more to complain about — other than Beyonce’s egregious loss for Album of the Year. Maren Morris and Alicia Keys were dynamite in their duet on “Only,” Sturgill Simpson and The Dap-Kings were excellent on “All Around You,” and John Legend and Cynthia Erivo‘s vocals on “God Only Knows” during the In Memoriam segment were sublime. Kudos as well to William Bell and Gary Clark Jr., who delivered a jolt of the blues with “Born Under a Bad Sign” that rarely gets a showcase during the main telecast.

What did you think of the Grammy telecast? Comment below, and make sure to join the discussion in our forums.