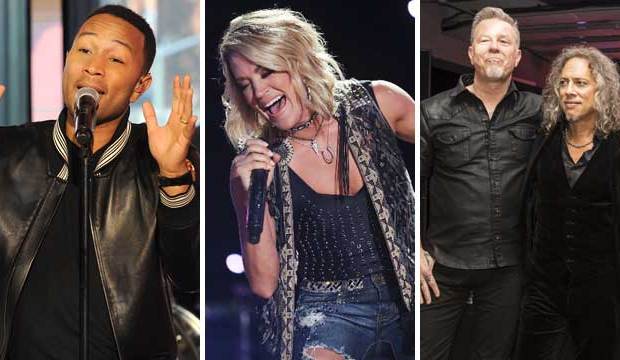 Sure, the Grammys are technically an awards show, but we all know their primary function is as the music industry’s premier concert. Most years the telecast is jam-packed with performances with just a smattering of awards — most trophies are actually handed out at a ceremony earlier in the afternoon. And this year is no exception. So which performance are you most looking forward to? Vote in our poll at the bottom of this post.

Lady Gaga, fresh off of her showstopping Super Bowl Halftime Show appearance last Sunday, will team up with heavy metal legends Metallica for an unlikely collaboration. But she’s no stranger to those — in her career she has performed with everyone from Beyonce to Tony Bennett.

Current Grammy nominee William Bell and past Grammy champ Gary Clark Jr. will also take the stage for a special collaboration. Also joining forces will be The Weeknd and Daft Punk, Maren Morris and Alicia Keys, and Anderson Paak with A Tribe Called Quest.

The Grammys will also pay tribute to the Bee Gees with a performance by Demi Lovato, Andra Day, Tori Kelly and Little Big Town. But that’s not the only tribute we can expect. The Grammys will also celebrate Prince and George Michael, who died tragically in 2016 — but the details of those tributes have not been revealed as of this writing.

John Legend and Tony winner Cynthia Erivo (“The Color Purple”) will perform together for an “In Memoriam” segment honoring others in the music community who died in the past year.

Which performance are you most excited about? Vote in our poll below, and don’t forget to make your Grammy predictions in 32 categories before winners are announced on February 12.

Gold Derby readers just like YOU often turn out to be our smartest prognosticators, so it’s important that you give us your predictions. You can continue to update and change your forecasts as often as you like before winners are announced on Feb. 12.  Just click “Save” when you’ve settled on your choices. You’ll compete to win a $100 Amazon gift certificate, bragging rights and a place of honor on our leaderboard. Our racetrack odds change as you make your predictions, just as they do when you bet on the Emmys, Oscars, Golden Globes and more. Be sure to read our contest rules and sound off on the Grammy race in our music forum.