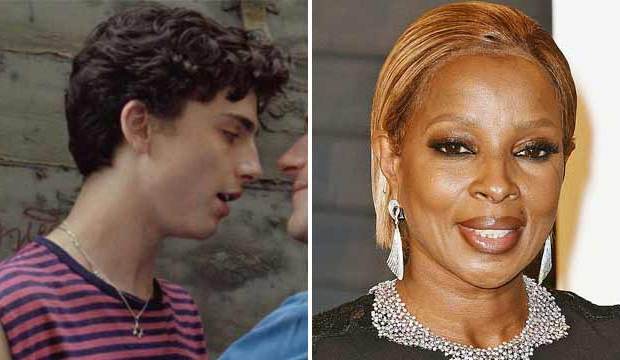 Mary J. Blige isn’t exactly a newcomer in the entertainment business. She has enjoyed decades of success as a recording artist, winning nine Grammys out of 31 nominations spanning more than 20 years. But she’s less known to audiences for her acting, even though she starred in the telefilm “Betty and Coretta” as Malcolm X‘s widow Betty Shabazz, as well as the films “Rock of Ages” and “Black Nativity,” and she earned a Critics’ Choice TV Award nomination in 2016 for her supporting turn in “The Wiz Live!” Now she’s garnering attention for her performance in Netflix’s “Mudbound,” directed by Dee Rees (“Pariah,” “Bessie”).

21-year-old Timothee Chalamet has been seen in the TV programs “Homeland” and “Royal Pains,” as well as the film “Interstellar,” but now he’s earning acclaim for his leading role in the romantic drama “Call Me by Your Name” in which he plays a teenager who falls in love with Armie Hammer as an older grad student. Chalamet is also featured in the coming-of-age comedy “Lady Bird” as a love interest for a Sacramento high schooler played by Saoirse Ronan.

The winning cast of “I, Tonya” includes Margot Robbie as the title character, disgraced figure skater Tonya Harding, as well as Allison Janney, Sebastian Stan, Paul Walter Hauser, Julianne Nicholson, and Caitlin Carver. The film tells the true story of Harding and her involvement in the attack on her competitive rival Nancy Kerrigan.

The Hollywood Film Awards will be hosted by James Corden for the third year in a row at the Beverly Hilton in Beverly Hills, California. What do you think of this first batch of winners? Will they go on to win Oscars?