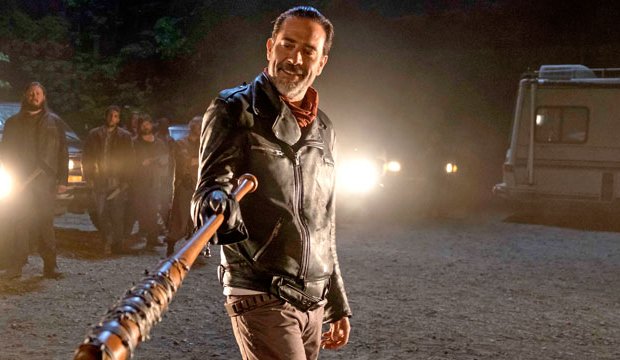 It’s no surprise to see Jeffrey Dean Morgan‘s Negan (“The Walking Dead”) among the list of Best Villain nominees at the 2017 MTV Movie & TV Awards. After all, this baseball bat-wielding baddie was responsible for the gruesome deaths of several major characters in Season 7 and completely changed the dynamic of the series. Do you think Negan is the Best Villain of the past year, or does another bad guy (or girl) deserve that title? Cast your vote in our poll below and then make your MTV predictions in all 16 categories.

The MTV Movie Awards have been handed out since 1992, but for 2017 the kudos branched out to include television. So this is the first opportunity for fan-favorite TV shows to battle against big-screen blockbusters, and oftentimes in the same categories. The awards will be held on May 7 at the Shrine Auditorium in Los Angeles, California, hosted by Adam Devine.

Besides Negan, the other Best Villain nominees from TV are Wes Bentley (“American Horror Story: Roanoke”) and Demogorgon (“Stranger Things”), while the film contenders are Jared Leto (“Suicide Squad”) and Allison Williams (“Get Out”).

Bentley has played a villain on the past two seasons of “AHS,” which perhaps explains why he’s nominated here instead of “Roanoke” scene-stealer Kathy Bates. On “Hotel” (2015) Bentley portrayed John Lowe, the Ten Commandments serial killer. And in last year’s “Roanoke” he took on the role of Dylan, an actor who played ghost Ambrose White on the show-within-a-show “My Roanoke Nightmare.”

Underneath the makeup and special effects of the Demogorgon is actor Mark Steger. The frightening monster from the first season of “Stranger Things” exists in the parallel world called the Upside Down, which our characters visited in the season finale.

On the film side, Leto’s role as the Joker in “Suicide Squad” scared audiences from the moment he first appeared in the trailer. This MTV nomination is payback of sorts for Leto, as his villainous performance was actually nominated at the Razzies as Worst Supporting Actor.

Rounding out the category, Williams plays bad girl Rose Armitage in “Get Out,” an accomplice to kidnapping in the surprise hit film. Williams may have a leg up on the competition as her final season of “Girls” is currently airing to rave reviews from critics and fans.

Be sure to make your MTV Movie & TV Award predictions. Weigh in now with your picks so Hollywood insiders can see how their movies and TV shows are faring in our racetrack odds. You can keep changing your predictions until just before nominees are announced on July 13. And join in the fierce debate over these awards taking place right now in our forums.