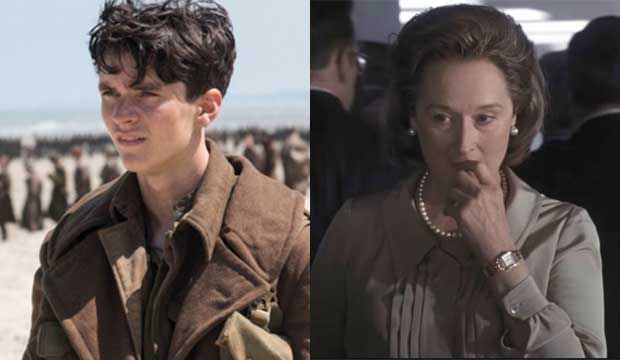 Five of our 12 Golden Globe experts derived from major media outlets are still predicting that the Oscar frontrunner, “Dunkirk,” will win Best Drama at these precursor prizes. However, four of them now back Steven Spielberg‘s docudrama “The Post,” which chronicles the fight by the Washington Post to publish papers related to the Vietnam War, over Christopher Nolan‘s WWII epic.

Of the three remaining experts, one is enamored by Luca Guadagnino‘s romance “Call Me By Your Name”; one is entranced by Guillermo del Toro‘s fantasy “The Shape of Water”; and one is stuck on Dee Rees‘ heartfelt drama “Mudbound.

Here’s how the Golden Globe Best Drama predictions break down by expert as well as the most up-to-date odds for each of the top eight contenders to win (all other films have odds of 100/1):

Be sure to make your Golden Globe predictions so that Hollywood insiders can see how their films are faring in our odds. You can keep changing your predictions until just before nominations are announced on December 11. And join in the fierce debate over the 2018 Golden Globes taking place right now with Hollywood insiders in our movie forums. Read more Gold Derby entertainment news.