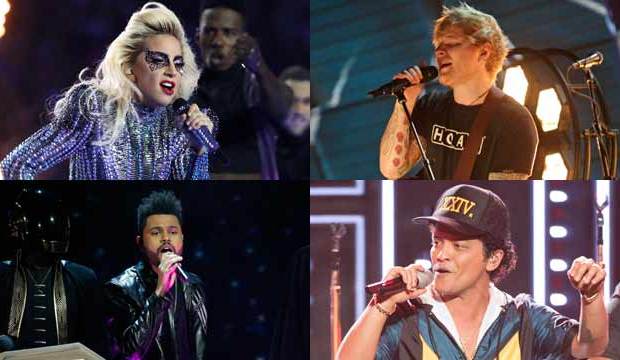 The controversial Adele vs. Beyonce rivalry was the dramatic narrative for the 59th Annual Grammy Awards this past February, but Music’s Biggest Night turns 60 next year and we already have more than half of our potential nominees to consider. The Grammy eligibility period started on October 1, 2016, and it ends September 30, 2017, which means that April Fools’ Day marked the midway point of the season. Below, let’s consider the strongest Album of the Year contenders so far.

The last two ceremonies have been dominated by major pop stars who are generally unbeatable powerhouses at the Grammys and on the charts: Taylor Swift in 2016 and Adele this year. While no one in the 2017 cycle is a beast quite the size of either of those artists, there are a trio of men who may very well end up in the Album of the Year inner circle. The first is Ed Sheeran, likely the top contender so far. His last album, “X,” scored an Album of the Year bid in 2015, and its third single, “Thinking Out Loud,” won Song of the Year. In fact, Sheeran has been nominated in the general field for all of the last five years. Perhaps it’s finally his turn to win the night’s biggest award for 2017’s “÷ (Divide).”

Also worth considering are a pair of November 2016 releases from past Album of the Year nominees. Bruno Mars dropped his third album, “24K Magic,” to stellar results on the Billboard charts, and the album remains in the top 10 of the Billboard 200 five months after its release. Similarly, The Weeknd’s “Starboy” has been a streaming juggernaut, and the album’s collaborations with recent Grammy winners Daft Punk will only further its chances at winning the gold.

Continuing the stream of strong pop contenders is three-time Album of the Year nominee Lady Gaga. Her fifth LP, “Joanne,” was released in October and got off to a slow start. Its lead single, “Perfect Illusion,” didn’t reach the heights of her biggest hits, but the album’s second single, “Million Reasons,” has become a sleeper success. And while her last solo studio album, “Artpop,” didn’t receive any Grammy nominations, her acclaimed Super Bowl performance and subsequent commercial resurgence was the perfect reminder of Gaga’s wide-ranging appeal, legacy (so far), and talent.

Major contenders from the rock and alternative fields have been light so far, but can we expect Green Day (“Revolution Radio”), Ryan Adams (“Prisoner”), and the late Leonard Cohen (“You Want it Darker”) to collect general-field nominations? Given Cohen’s endless critical acclaim surrounding “Darker” in October and his untimely death in November, an Album of the Year nomination looks like a sure thing on paper. But considering the fact that David Bowie missed out on the top categories this past year for his final album before his death, “Blackstar,” it is unfortunately unlikely that Cohen will receive any major Grammy attention.

As rap continues to dominate the streaming charts, hip-hop remains a consistent contributor to the general-field nominations — if not general-field wins. Drake is back with “More Life” in hopes of a second consecutive Album of the Year nomination after his bid for “Views” this year, but it’s still in question if he’ll submit it for consideration at all since Drake openly boycotted the 2017 ceremony and dismissed the awards he won there. Also in contention are A Tribe Called Quest for their critically adored comeback album “We Got It from Here…Thank You 4 Your Service” — their defiant Grammy performance didn’t hurt. And Migos competes with “Culture,” their LP of fresh, viral hits. Childish Gambino moved from straightforward rap to genre-bending soul, pop, and funk with his December release “Awaken, My Love!” so he might be moving into the urban contemporary field with that one.

But of course, it’s only April. Kendrick Lamar’s latest effort, “DAMN,” was just released on April 14 and it’s already making waves. And a trio of female pop superstars return with albums later this year and we won’t be able to miss it – so expect Katy Perry, Lana Del Rey and Lorde to compete for the gold. We might also get new albums from Grammy winners Sam Smith and St. Vincent before the September eligibility cutoff, as well as from 2015 Best New Artist nominees Haim.

The Album of the Year landscape may look very different by the time September 30 hits. Who of the existing contenders do you think will secure a nomination?

2021 Grammy odds: Early favorites for Record of the Year include The Weeknd, Megan Thee Stallion, Harry…

MTV Video Music Awards plan to go on with the show, and soon: VMAs date and venue for 2020 awards…

Predict the 2021 Grammys: Who will win Record and Song of the Year - Lady Gaga, Roddy Ricch, Billie…

Grammys got new rules: Changes made to Best New Artist, R&B, rap and Latin categories, but is it…