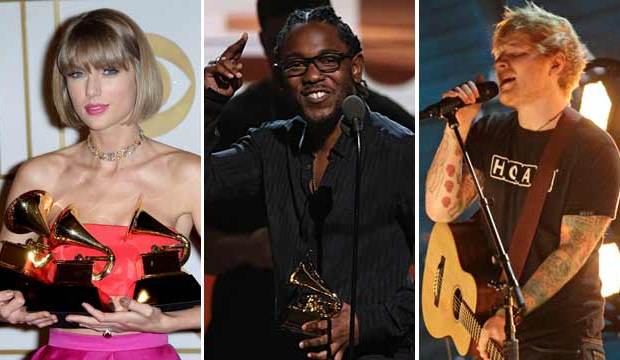 The 60th Annual Grammy nominations won’t be announced until November 28, 2017, but you can now enter your predictions here at Gold Derby in three of the top four general field categories: Album of the Year, Record of the Year, and Song of the Year — keep an eye out for Best New Artist, which we’ll be adding in the coming weeks.

Nominations may be two months away, but the eligibility period for the Grammys is October 1, 2016 to September 30, 2017, so we’ve already seen almost all of the top contenders who will be eligible to compete. It could be a big year for hip-hop with critically acclaimed and chart-topping albums by Kendrick Lamar (“Damn“), Jay-Z (“4:44“), Drake (“More Life“), and A Tribe Called Quest (“We Got it From Here”), among others.

However, the Grammys have proven reluctant to reward urban artists, as illustrated by Beyonce‘s surprise loss to Adele earlier this year. That could be good news for pop and adult-contemporary artists like Ed Sheeran (“Divide”), Lady Gaga (“Joanne”), and Lorde (“Melodrama”). And though Taylor Swift won’t be eligible for Album of the Year — her album “Reputation” doesn’t drop until November — she could make the cut in Record of the Year and Song of the Year categories again for her popular but divisive new hit “Look What You Made Me Do.”

But this isn’t just a popularity contest. After an initial vote by recording academy voting members, the final decisions in the general field will be made by nominations review committees, which sometimes make surprising selections like “The Blessed Unrest” by Sara Bareilles (2014) and “A Sailor’s Guide to Earth” by Sturgill Simpson (2017). That could be good news for critically acclaimed singer-songwriters like Father John Misty (“Pure Comedy“), Aimee Mann (“Mental Illness“), and SZA (“Ctrl”).

What do you think? You can make your initial predictions now, and update them as often as you like between now and November 28, when the nominations are unveiled.