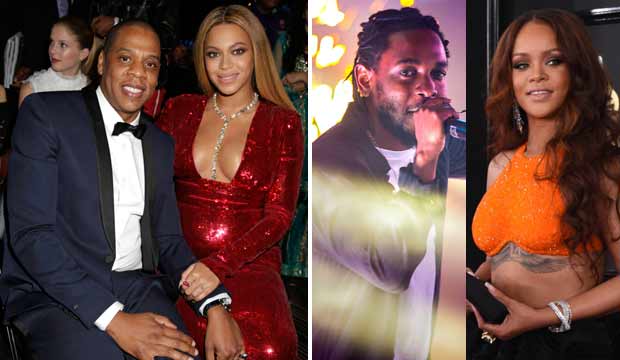 The Grammy for Best Rap/Sung Performance usually goes to a collaboration between artists, and the 2018 race could be the mother of all tag-team matches as two pairs of music juggernauts face off. Jay-Z and Beyonce are nominated for “Family Feud,” from Jay-Z’s album “4:44.” And Kendrick Lamar and Rihanna are up for “Loyalty,” from Lamar’s album “Damn.” Which duo has the advantage?

On paper they’re both evenly matched, though Jay-Z and Beyonce have seniority. They’ve been around longer and have accumulated a remarkable 43 Grammys between them. In fact, they won this award together in 2004 for “Crazy in Love,” Beyonce’s breakthrough hit as a solo artist. Since then Jay-Z has just kept on winning this award — six more times to be exact. He won for “Numb/Encore” with Linkin Park (2006); “Umbrella” with Rihanna (2008); “Run This Town” with Rihanna and Kanye West (2010); “Empire State of Mind” with Alicia Keys (2011); “No Church in the Wild” with Kanye West, Frank Ocean, and The-Dream (2013); and “Holy Grail” with Justin Timberlake (2014). The Grammys certainly aren’t shy about handing out repeat wins, so can we expect a record-extending eighth win for Jay-Z?

But Rihanna is also a big winner in this category. With four victories she has won it more often than any other woman. In addition to her two aforementioned victories with Jay-Z she prevailed for “All of the Lights” with Kanye West, Kid Cudi, and Fergie (2012) and “The Monster” with Eminem (2015). And Kendrick Lamar won in 2016 for “These Walls” with Bilal, Anna Wise, and Thundercat. Rihanna and Lamar have won a combined 15 Grammys to date, which isn’t nearly as many as Beyonce and Jay-Z, but we mustn’t underestimate them given the recording academy’s love of Lamar this year; he has seven total bids, just one less than Jay-Z.

Of course, “Family Feud” and “Loyalty” aren’t the only nominees in this category. We should probably watch out for “Love Galore” by SZA featuring Travis Scott. SZA is one of the year’s most nominated artists with five bids, including Best New Artist and Best Urban Contemporary Album for her debut “Ctrl.” Also contending in this category is “PRBLMS” by 6LACK, who also contends for Urban Contemporary Album (“Free 6LACK”). Rounding out the category is “Crew” by Goldlink featuring Brent Faiyaz and Shy Glizzy, none of who have any other nominations this year.

So who do you think will win?