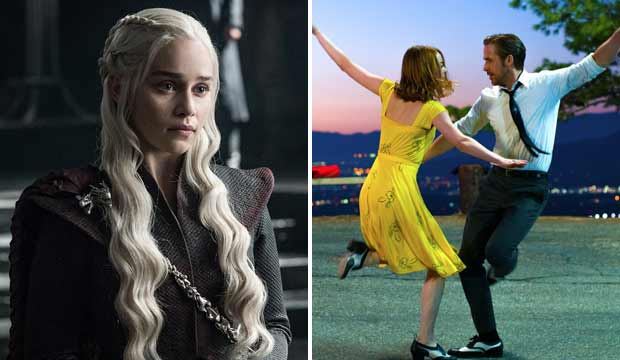 “Game of Thrones” has naturally focused its awards attention on winning TV kudos like the Emmys. But there is one top music award they’ve been repeatedly snubbed for in the past but now have their first shot to win. For their seventh season “Thrones” and composer Ramin Djawadi have finally received a Grammy nomination for Best Visual Media Score. A victory would be historic as it would be just the second TV series to win this award (“Mission: Impossible” prevailed in 1968), but to do so it will have to go through “La La Land.”

“La La Land” won six Oscars in 2017, but famously came up short for Best Picture, losing out to “Moonlight.” The Grammys are the last awards stop for the film, which also has seven Golden Globes to its credit. Now the modern Los Angeles original musical has four nominations from the recording academy: in addition to Best Visual Media Score for Justin Hurwitz it’s up for Best Compilation Soundtrack, Best Visual Media Song for “City of Stars (Hurwitz, Benj Pasek, and Justin Paul), and Best Arrangement (Instruments and Vocals) for “Another Day of Sun” (Hurwitz).

For composer Hurwitz this would be the icing on the cake as he has already won two Globes, two Oscars, and a BAFTA Award for his work on the film. But in addition to “Game of Thrones” there are three other contenders with a chance to halt his winning streak. “Arrival” (Johann Johannsson) and “Hidden Figures” (Benjamin Wallfisch, Pharrell Williams and Hans Zimmer) were both snubbed at the Oscars for Best Original Score, so they could be at a disadvantage — though Johannsson is a past Grammy nominee and Williams and Zimmer are both multiple Grammy winners. The fifth nominee is “Dunkirk” (also Hans Zimmer), which is eligible for the 2018 Oscars.

“Stranger Things” (Kyle Dixon and Michael Stein) was the most recent TV series to compete; it actually had two chances to prevail as it was nominated in 2017 for both “Vol. 1,” and “Vol. 2,” which might have split the vote. Before that the HBO miniseries “Angels in America” (Thomas Newman) was nominated in 2005. “Northern Exposure” (David Schwartz) contended in 1993. And “Twin Peaks” (Angelo Badalamenti) made the cut in 1991. But none of them won. However, “Game of Thrones” has become a cultural phenomenon, and the recording academy might want to take this opportunity to award it 50 years after the first-ever victory for a TV series.

It’s hard to know how a show like “Game of Thrones” will fare against “La La Land” as the Grammys are the only major award where they would go head-to-head. But for composer Djawadi this is a significant accomplishment. The composer has been with “Thrones” from the start but has only received one Emmy nomination for the series: in 2014 for the episode “The Mountain and the Viper.” (Djawadi has additional Emmy noms for composing “Prison Break,” “Flashforward,” and “Westworld,” but has never won.) Simply making this lineup for the first time could be a good sign that one of the few categories where the Emmys have never awarded the series could finally go Djawadi’s way in 2018.