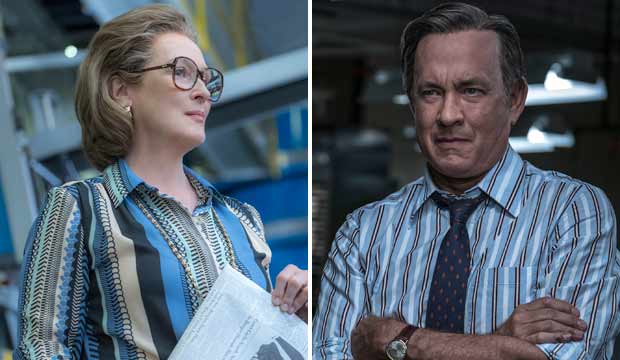 The National Board of Review announced its winners on Tuesday (Nov. 29). Steven Spielberg‘s docudrama “The Post” won Best Picture and boasts both lead performance winners with Meryl Streep prevailing for her portrayal of Washington Post publisher Katharine Graham and Tom Hanks winning for his take on the paper’s editor Ben Bradlee.

Greta Gerwig won the Best Director prize for her solo helming effort, “Lady Bird,” which showcases Emmy and Tony champ Laurie Metcalf who won the Supporting Actress award. She is the Oscar frontrunner as is Supporting Actor winner Willem Dafoe (“The Florida Project”). The cast of “Get Out” claimed the Best Ensemble prize while Timothee Chalamet (“Call Me By Your Name” won the Breakthrough Performance award.

All six of these films figured in the NBR Top 10 which also includes “Baby Driver,”  “Downsizing,” “Dunkirk,” and “Logan.” Missing from this list are three strong Oscar contenders: “Darkest Hour,” “The Shape of Water” and “Three Billboards Outside Ebbing, Missouri.”

The NBR will honor its winners at a gala dinner in New York City on Thursday, January 4. For the fourth year in a row, NBC newsman Willie Geist will emcee the ceremony.

The last time this group based in New York City comprised of “knowledgeable film enthusiasts and professionals, academics, young filmmakers and students” previewed the Best Picture Oscar winner was back in 2009 with “Slumdog Millionaire.”

Last year, the NBR previewed the two Academy Award wins for “Manchester by the Sea” — Best Actor (Casey Affleck) and Original Screenplay (Kenneth Lonergan) — but it also went with it for Best Picture over eventual Oscar champ “Moonlight.” That film did claim Best Director (Barry Jenkins) and Supporting Actress (Naomie Harris) from the NBR but did not repeat in either of those categories at the Academy Awards.

The NBR award for Best Actress went to Amy Adams (“Arrival) who went on to be snubbed by the academy, while Oscar champ Jeff Bridges (“Crazy Heart”) picked up Best Supporting Actor for his scene-stealing performance in “Hell or High Water.” All four films featuring acting champs made the NBR’s list of “Top Films” as did “Hacksaw Ridge,” “Hail, Caesar!,” “Hidden Figures,” “La La Land,” “Patriot’s Day,” “Silence” and “Sully.”