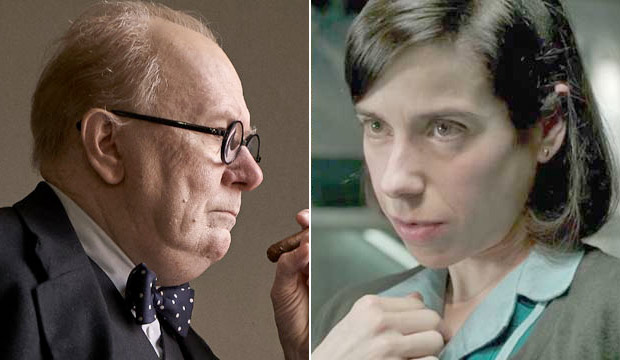 The Academy of Motion Picture Arts and Sciences has always been filled with a lot of anglophiles, hence their frequent bestowing of Oscars on British performers. This year there is a possibility that both Oscars for Best Actor and Best Actress will go to British performers: Gary Oldman (“Darkest Hour”) and Sally Hawkins (“The Shape of Water”). Should it happen, this would only be the fourth time in Oscar history that Great Britain took home both of the top American acting awards.

At the moment Oldman has a steady lead at the top of Gold Derby’s 2018 Oscar predictions for Best Actor for playing British Prime Minister Winston Churchill. Another Brit, Daniel Day-Lewis, is in second place for the Paul Thomas Anderson film “Phantom Thread,” which has yet to be screened for critics.

On the female side Hawkins is in a tight race with American actress Frances McDormand (“Three Billboards Outside Ebbing Missouri”). However, Hawkins recently pulled ahead for Best Actress with Gold Derby’s industry experts for her role as a mute janitor in Guillermo del Toro‘s fantasy love story.

The first time British performers won the top American acting prizes was in 1939, when Vivien Leigh won Best Actress for “Gone with the Wind” and Robert Donat prevailed for “Goodbye Mr. Chips.” It may come as a surprise to some that Leigh was actually English since her two most famous (and Oscar-winning roles) were as legendary Southern belle characters: Scarlet O’Hara in “Gone with the Wind” and Blanche Dubois in “A Streetcar Named Desire.”

The second set of British winners were Rex Harrison (“My Fair Lady”) and Julie Andrews (“Mary Poppins”) in 1964. These victories had as much drama off screen as on since Andrews had starred in the original cast of “My Fair Lady” on Broadway with Harrison but was passed over for the film for not being a big enough film star. In what has become known as Poppins Revenge in Oscar circles, Andrews would win for the Disney film alongside her original leading man from the stage production while Audrey Hepburn, who played Eliza Doolittle in the film wasn’t even nominated. “My Fair Lady” was nominated for 12 Oscars overall and won eight so the omission of Hepburn was even more glaring.

The third and final time two Brits took Best Actor and Actress was in 1989 when Jessica Tandy (who had ironically lost her stage role as Blanche Dubois in “Streetcar” to Vivien Leigh) won Best Actress for “Driving Miss Daisy” and Daniel Day-Lewis won the first of his record three Best Actor trophies for “My Left Foot.” Might Oldman and Hawkins join this esteemed list of Brit thespians to prevail at the Oscars in the same year?