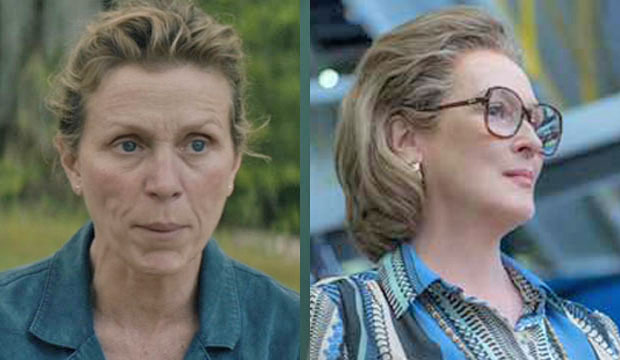 In the Oscar race for Best Actress, frontrunner Frances McDormand (“Three Billboards Outside Ebbing, Missouri”) has a new challenger: three-time Oscar champ Meryl Streep who just won this award from the National Board of Review for her sensitive portrayal of Washington Post publisher Katharine Graham in Steven Spielberg‘s docudrama “The Post.”

Playing a real-life woman has been a winning formula for 20 of the 90 Best Actress champs, including 10 of the last 21 to take to the stage. Streep was the most recent of these, picking up her long overdue third Oscar in in 2012 for her steely portrayal of British PM Margaret Thatcher in “The Iron Lady.” That marked the 14th of her record 16 Best Actress nominations; she had first won on her second Best Actress bid back in 1983 for “Sophie’s Choice.” Streep also won one of her four Supporting Actress nominations (“Kramer vs. Kramer,” 1980).

McDormand headlines Martin McDonagh‘s character study, which won the audience award at the Toronto film festival. She plays a grieving mother who tries to shame the local police chief (Woody Harrelson) into investigating the murder of her daughter. McDonagh, a Tony-nominated playwright, won the Best Live Action Short Oscar in 2004 for “Six Shooter.” McDormand numbers just a single Best Actress bid among her four Oscar nominations but it was the one that proved to be the winner (“Fargo,” 1996).

As of this writing, Streep doesn’t have the backing of any of our 24 Experts who are drawn from major media (see rankings) who favor McDormand by a margin of 14 votes to six for Sally Hawkins (“The Shape of Water”) and four for Saoirse Ronan (“Lady Bird”). However, that could well change in the coming days as our pundits update their predictions.