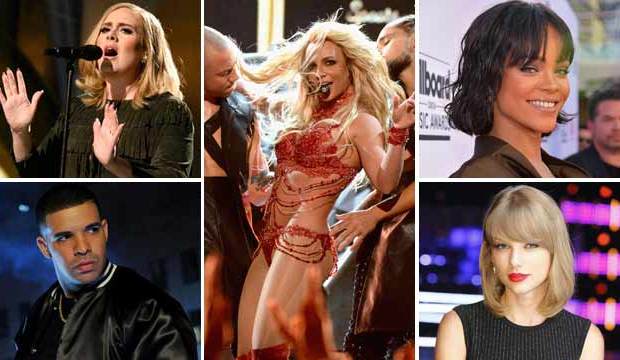 Recent rumors that Britney Spears was in talks to return to the Super Bowl Halftime Show stage has forced the sponsoring company, Pepsi, to release a statement confirming the pop star will, in fact, not perform at the 2018 event. The “Toxic” singer first entertained fans on football’s biggest night in 2001 when she collaborated with Aerosmith, Mary J. Blige, N Sync and Nelly. Now the official denial of her return has caused many to speculate who will be the next music superstar to benefit from the exposure that comes along with the enormous pressure of performing at Super Bowl LII.

In February of this year, Lady Gaga’s jaw-dropping set resulted in skyrocketing music sales and, more recently, a record-breaking six Emmy nominations, including Best Special Class Program. Beyonce previously earned an Emmy nomination for her Halftime Show in 2013. So did Bruno Mars (2014) and Katy Perry (2015). And the 2016 Halftime Show starring Coldplay, Mars and Beyonce also earned a bid.

So which singer do you think is most qualified to follow-up Lady Gaga’s Super Bowl performance in Minneapolis next year? Vote in our poll below, or tell us your own choice in the comments or with your fellow music fans in our forums.

Adele – Clearly Adele is peerless when it comes to the number of albums sold worldwide with each release. Her last two LPs, “21” and “25” are the only albums certified diamond (10x Platinum) in the United States this decade. The likable Brit would be a ratings draw, although some may argue her adult contemporary style of music isn’t right for the party atmosphere of the Super Bowl.

Justin Bieber – The worldwide superstar currently holds the top two positions on Billboard’s Hot 100 with “Despacito” and “I’m the One.” Despite personal controversies, Bieber has never faltered on the charts or with his fans, winning the audience-voted American Music Award for Artist of the Year in 2010 and 2012. While many thought the former teen heartthrob would fade into obscurity, Bieber is hotter than ever nearly 10 years into his career.

Luke Bryan – It’s been more than a decade since Shania Twain performed at the Super Bowl in 2003, and no other country artist has been booked since. If you like a little twang with your football, Luke Bryan could be your best bet. Considering he has won Entertainer of the Year from both the Country Music Association and the Academy of Country Music, we’re willing to bet he could put on one heck of a show.

Drake – Billboard’s reigning Artist of the Year is at the top of his game. In May, Drake took home 13 Billboard Awards in total, more than any artist ever in a single night. The hip-hop star has charted 154 songs on the Billboard Hot 100, more than any artist in history, and his recent smash “Hotline Bling” earned him his second and third Grammys earlier this year — though those proved controversial. This rapper has proven to have universal appeal that could entertain a vast audience.

Pink – This high-flying diva has made a name for herself by incorporating complicated acrobatics into her performances. Whether it is aerial choreography or swinging from a trapeze, this “Raise Your Glass” singer has plenty of party anthems to bring her exciting show to an even bigger stage.

Rihanna – There’s no bigger hit-maker in this generation than the beauty from Barbados. With 14 number-one singles, Rihanna holds the Guinness World Record for most digital singles sold and is the only artist in history to sell over 100 million singles. With that track record, she would have no shortage of hits to choose from to get a worldwide audience on their feet.

Ed Sheeran – The English singer-songwriter has been flying up the ranks as one of the most popular touring artists of the year. Not only has he created some of music’s most catchy pop tunes, but his underrated guitar skills are a spectacle of their own. His wildly successful tour is scheduled to continue through August 2018, but we couldn’t help but notice he has no dates scheduled in January or February.

Taylor Swift – Taylor Swift dominated the music scene in 2015 and became the first woman in history to win a Grammy for Album of the Year twice as a lead artist. After a string of huge hits, Swift stepped away from the spotlight and has been MIA for more than a year. The pop-country crossover artist is one of the best-selling singers of this generation and ripe for a huge return. What stage could kick off a bigger comeback than the Super Bowl?