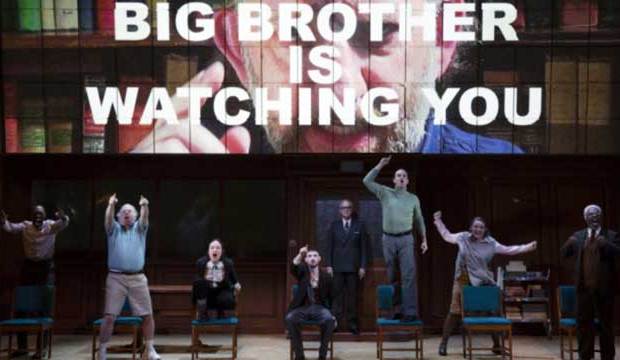 The acclaimed stage version of George Orwell‘s classic novel “1984” has been ruled ineligible for consideration at the upcoming Tony Awards. Unlike other kudos, these top Broadway honors decide eligibility on a rolling basis and the Administration Committee met on Nov. 9 for the first of four times this season. The committee ruled that “1984” did not fulfill the requirement dictated by Tony Awards rules that the 24 members of this group and the 51 people on the Nominating Committee attend the production.

Directed by London stage mainstays Robert Icke and Duncan Macmillan, “1984” opened on June 22 at the Hudson Theatre and ran for almost 16 weeks. With 125 performances to choose from, it is hard to understand how one or more of these 75 dedicated theater folk did not see the show. Adding to the enigma is the fact that one of the lead producers of “1984” is John Gore, one of the members of the Administration Committee.

“1984” starred past Tony-nominee Tom Sturridge (“Orphans”) as the timid protagonist Winston, who rebels against the propagandist government of Oceania and its leader, the near-omniscient Big Brother. The notable cast also included screen star Olivia Wilde and theater veteran Reed Birney, who just won his first Tony in 2016 for Featured Actor in a Play for his performance in “The Humans.”

The Administration Committee also considered four other productions: “Marvin’s Room,” “The Terms of My Surrender,” “Prince of Broadway” and “Time and the Conways.” The  defacto rule is that only those actors billed above the title compete as leads. However, with the increase in equal billing for all, there is a need to separate out the true star turns from the supporting players. To that end, producers can petition for any changes and the committee made the following rulings:

“Marvin’s Room”
Celia Weston will be considered eligible in the Best Featured Actress in a Play category.

“Time and the Conways”
Steven Boyer, Anna Camp, Gabriel Ebert, Charlotte Parry and Matthew James Thomas will be considered eligible for in the featured categories for their work in this play.

In addition, the committee decided that for the musical “Prince of Broadway,” David Thompson will be considered eligible for Best Book, William Ivey Long for Best Costume Design and Beowulf Boritt for Best Scenic Design. And for the play “The Terms of My Surrender,” David Rockwell and Andrew Lazarow will be considered jointly eligible for  Best Scenic Design.

DISCUSS Tony contenders with Broadway insiders in our notorious forums