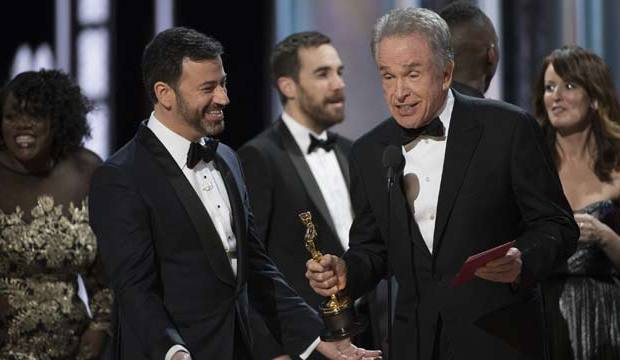 The most shocking Oscar ending in history gave host Jimmy Kimmel one final chance to cement his place as the most adept Oscar host in recent years. The first-time emcee had to navigate the unprecedented moment “La La Land” was mistakenly named the winner for Best Picture when “Moonlight” was the rightful champ (more on that here). Despite that snafu, Kimmel brought his own unique brand of sardonic wit, wicked barbs, and a surprising amount of grace to what was an emotional, fast-moving, and ultimately unforgettable Oscar ceremony.

Justin Timberlake kicked off the show, bringing the audience to its feet with a performance of his Oscar nominated song, “Can’t Stop the Feeling” from “Trolls.” Kimmel took over from there, delivering a monologue that was the perfect combination of cutting and comedic. Starting with a plea to bring the country together, Kimmel immediately took aim at Mel Gibson, Damien Chazelle’s youth, and particularly his longtime rival Matt Damon, praising the producer of “Manchester by the Sea” for giving the lead role to eventual Best Actor-winner Casey Affleck and choosing to instead make the box-office disappointment “The Great Wall.” Damon was a continued target for Kimmel, with the host mocking Damon’s “We Bought a Zoo,” and cuing the orchestra to play Damon off while the actor presented Best Original Screenplay.

While Kimmel only made a few direct mentions of President Donald Trump and his Twitter feed, there was an extended and quite pointed segment where Kimmel mocked the president’s labeling of Meryl Streep as overrated. The 20-time Oscar nominee stood up and graciously accepted a standing ovation before Kimmel asked if her gown was from the Ivanka collection, a reference to the first daughter’s clothing line, which was recently dropped by the Nordstrom department store chain. Later, Kimmel baited Trump directly, sending him a tweet with the hashtag “#Merylsayshi.”

Though Kimmel showed some level of restraint in his Trump barbs, other winners and presenters picked up the slack. Accepting the Best Foreign Language Film award for Asghar Farhadi (“The Salesman”), Anousheh Ansari, the first Iranian to go to space, read a statement from the Iranian director calling out President Trump for what Farhadi called “inhumane” travel bans proposed by the president. And while presenting the award for Best Animated Feature, Mexican-born actor Gael Garcia Bernal took a moment to decry the president’s proposal for a U.S.-Mexico border wall.

In one of Kimmel’s most inspired bits, a group of tourists were brought into the Dolby Theater, seemingly unaware that the Oscars were happening. But their genuine shock and joy at getting to take selfies with Denzel Washington, Nicole Kidman, and Mahershala Ali’s Oscar were infectious, and one of the highlights of the evening.

Not every one of Kimmel’s gags landed. Giving food to the audience has become a tradition at awards shows. This time the food fell from the sky in the form of classic movie theater candies like Red Vines and Junior Mints. But once was enough. The second iteration of the gag was helped by Kimmel’s banter with the adorable Sunny Pawar (“Lion”). But by the time cookies and doughnuts began falling from the sky, the gag had worn a bit thin.

Nostalgia seemed to be the theme of the evening. There was something sweet about the montages of previous winners that played prior to each acting category, which gave the evening a sense of history and legacy. Even the choices in music — presenters walked out to iconic film scores — seemed chosen to provoke an emotional response. An appearance by 98-year-old Katherine Johnson, the NASA mathematician played by Taraji P. Henson in “Hidden Figures,” inspired the crowd to rise in an extended standing ovation. I particularly enjoyed modern movie stars reflecting on some of their favorite films and performances, especially Seth Rogen’s genuine enthusiasm about “Back to the Future” and presenting with the film’s star, Michael J. Fox.

That emotion carried over to the acceptance speeches, and thankfully the producers let the winners take their time, leading to some unexpected moments of genuine emotion. Mahershala Ali (“Moonlight”) celebrated the recent birth of his daughter while accepting the Best Supporting Actor Oscar. Viola Davis (“Fences”) demonstrated why she is a national treasure, giving one of the night’s most emotional and heartfelt acceptance speeches, leading Kimmel to proclaim that she deserved an Emmy nomination for her speech. During the In Memoriam segment, Sara Bareilles sang a beautiful and heartbreaking rendition of Joni Mitchell’s “Both Sides Now.” “Moonlight” writers Barry Jenkins and Tarell Alvin McCraney promised that movies would continue to be a mirror for those who feel forgotten or ignored.

And despite the disappointment that the producers of “La La Land” must have felt, they deserve an Oscar for graciousness for how they handled the bedlam of the Best Picture category.

But at the center of it all was Kimmel, a down-to-earth host if there ever was one. While some hosts seem focused on delivering jokes and just keeping the show moving, Kimmel seemed more intent on maintaining a connection with the audience, and his ease in doing so made a long evening move quite smoothly … right up until the Best Picture category, that is.

VMAs 2022: Taylor Swift's epic 'All Too Well' video could make history in more ways than…