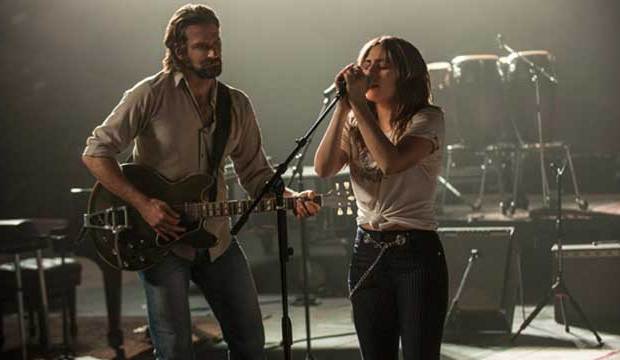 Filming has just begun on a new version of “A Star is Born” which stars Lady Gaga (to be billed under her real name of Stefani Germanotta) and Bradley Cooper who is also directing, producing and co-writing this remake. The story of an older performer who falls in love with a younger woman and masterminds her career ascent only to see his own fall apart has been a Hollywood staple since the first time the film was made as a straight drama in 1937. This tune-filled version follows musical remakes in 1954 and 1976.

The original starred the first-ever Best Actress Oscar winner Janet Gaynor as aspiring actress Esther Blodgett and Frederic March as her husband, matinee idol Norman Maine. The script (which included Dorothy Parker among its four writers) had Maine give Blodgett (newly-named Vicki Lester) a role in a film. She rises to great heights while he slips into alcoholic despair. The film climaxes with a drunken March interrupting Gaynor’s Oscar acceptance speech. After March commits suicide Gaynor addresses her fans in a radio interview identifying herself as “Mrs. Norman Maine” a scene which became an iconic screen moment.

This version received seven Oscar nominations including in all the major categories (picture, actor, actress, director) and won for its screenplay. That win was surprising given the plot’s similarity to 1932’s “What Price Hollywood?” George Cukor had directed that film and turned down and offer to helm “A Star is Born” because he felt the projects were too similar. And RKO Studios briefly considered filing a plagiarism lawsuit against the producers of “A Star is Born” but eventually choice not to pursue legal action.

In 1954, the story was reworked as a vehicle for Judy Garland and Cukor agreed to direct this version. Garland played an aspiring singer while James Mason was the alcoholic star who helps her career. In real life Garland’s life was closer to that of the declining star suffering from addiction than that of the newcomer. The shooting of the film was reportedly quite chaotic due to Garland’s physical and mental health issues but ultimately Cukor was able to put together a well-received film that won over critics and audiences.

The movie received six Oscar nominations including bids for Garland and Mason. Garland was considered the front runner to win the award and cameras were set up in her hospital room (she had just given birth to son Joey Luft) to televise her acceptance speech. In one of the biggest upsets in Oscar history Garland lost to Grace Kelly for “The Country Girl,” a performance that had not nearly garnered the amount of praise Garland had. Garland’s loss was  attributed to having disappointed a lot of academy members with her unprofessional behavior.

The Golden Globes awarded both Garland and Mason as Best Actress and Best Actor in a Comedy or Musical. Garland would go on to be nominated again for an Oscar for Best Supporting Actress for “Judgment at Nuremberg” while Mason would be nominated twice in the supporting category for “Georgy Girl” and “The Verdict” but neither of them was ever able to take home the prize.

The next remake was in 1976 with Barbra Streisand producing and starring as the newcomer. This time the story took place in the recording industry rather than the film world and Kris Kristofferson played her alcoholic mentor. Elvis Presley was the first choice but his manager demanded top billing and worried about his client playing a star in his declining years.Presley would be dead within a year of the film’s release at age 42 and his ex-wife, Priscilla Presley, later said that Elvis desperately wanted to do the film and she often wondered if working on it could have helped him turn his life around.

This version was wildly successful at the box office but brought Streisand a great deal of bad publicity for over-stepping her roles in the film’s production. Streisand has always attributed the controversy to sexism but her director Frank Pierson was so upset by working with her that he published an article in New York magazine which was highly critical of the star. This remake of the story ended up receiving mostly negative reviews but Streisand’s drawing power was such that crowds still turned out for the film.

The film earned four Oscar nominations in technical categories and Streisand, as composer, shared in a Best Original Song for “Evergreen” with lyricist Paul Williams. The film did extremely well at the Golden Globes where it prevailed in all five of its bids: Best Picture (Comedy or Musical,) Actress and Actor in a Comedy or Musical (Streisand and Kristofferson), Best Score and Best Original Song for “Evergreen.”

The new version of “A Star is Born” scheduled for release in 2018 is a passion project for  Cooper and a bit of a risk. As producer, director, screen writer and star he is following in Streisand’s footsteps. Whether or not the story holds up for a fourth go around is clearly on his shoulders. Beyoncé was thought to be his first choice as a leading lady but her pregnancy meant that Lady Gaga got the role. She has only had limited experience as an actress and if she succeeds will be much like her character in the film.

Oscar Experts Typing: Who will round out the Best Actor lineup?