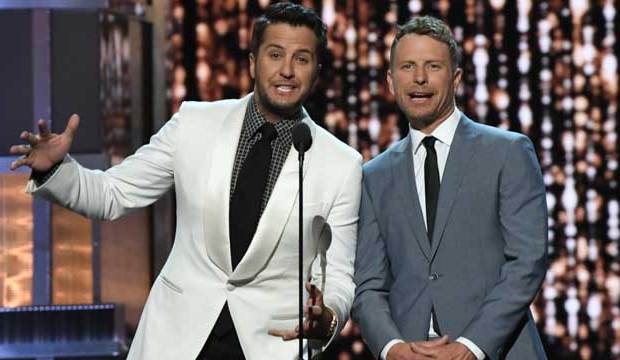 Dierks Bentley was a bit apprehensive about hosting the 2017 Academy of Country Music Awards for the second year in a row with Luke Bryan. When upcoming Emmys host Stephen Colbert asked the duo for award show advice on “The Late Show,” Bentley told him, “Drinking works.” Bryan recommended that the audience be drunk as well — as Bentley explained, “If they drink enough they forget it.” Well the ACMs have just aired, and if you’re still sober let us know what you thought about their hosting duties in our poll at the bottom of this post.

The ACM Awards were held at the T-Mobile Arena in Las Vegas, Nevada, so Bryan and Bentley opened the event with a slideshow of their activities in town, including circus training and an appearance with the “Thunder from Down Under” burlesque show. They gently ribbed nominees like Thomas Rhett and Keith Urban, but then they mostly took a hands-off approach to hosting, coming back to the stage mostly to do what they do best: perform their music.

Bryan and Bentley were also nominated for awards. Bryan was up for Entertainer of the Year, and Bentley contended for three including Male Vocalist of the Year. Unfortunately, neither of them took home any hardware, but they apparently did make off with a couple of Thomas Rhett’s shirts, so it wasn’t a total loss. What did you think of their hosting duties? Vote in our poll below.

Who's performing on 'American Idol' tonight? Meet the Top 11 finalists competing for America's…