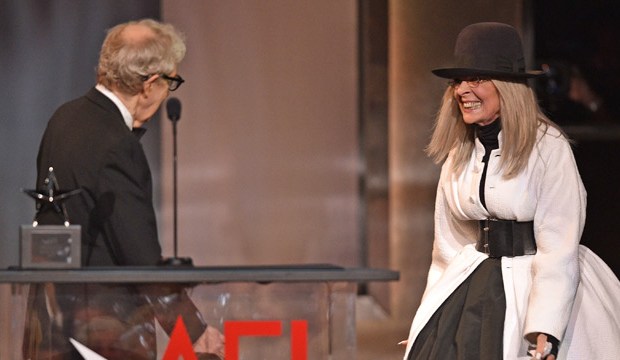 Hollywood’s biggest stars came out to celebrate Diane Keaton Thursday night at the Dolby Theatre as she became the 45th recipient of the prestigious AFI Life Achievement Award. Woody Allen, who directed her Oscar-winning role in “Annie Hall” (1977), made a surprise appearance to present Keaton with the award, saying, “From the minute I met her she was a great, great inspiration to me. Much of what I have accomplished in my life I owe, for sure, to her.” Allen made several comments about Keaton that many interpreted as barbs, but others found to be in good fun. Keaton’s AFI tribute will air June 15 on TNT.

Of note, this was Beatty’s first time back on the Oscar stage since the Envelopegate fiasco, so luckily he honored Keaton instead of “La La Land.” And Streep made a savvy style choice by dressing up like Keaton, wearing a black suit with a large striped necktie, glasses and a hat. Throughout the evening many people made note of the fact that Keaton wasn’t just an Oscar-winning actress, but also a style icon, photographer, writer, director and producer.

But that’s not all. Martin Short, who won an Emmy in 2014 for hosting Mel Brooks‘ AFI salute, sang a hilarious introductory song with his old buddy Steve Martin to honor their “Father of the Bride” co-star Keaton. And several A-list admirers of Keaton’s also popped up to share fond memories of the actress, including Lisa Kudrow, Rachel McAdams, Sarah Silverman, Emma Stone and Reese Witherspoon.

When she finally took to the stage, Keaton decided to forego the speech she’d written, instead singing the song “Seems Like Old Times” from “Annie Hall.” Besides Keaton’s Best Actress Oscar triumph for the iconic comedy film, “Annie Hall” also won Best Picture, Best Director for Allen and Best Original Screenplay for Allen and Marshall Brickman.

Gold Derby briefly chatted with Keaton during the dinner portion of the evening, and we reminded her that it was past winners Janet Gaynor and Walter Matthau who presented her with her Oscar back at the 50th ceremony. Keaton was excited for the brief trip down memory lane, as she starred with the late Matthau many years later in the comedy “Hanging Up” (2000).

The AFI Life Achievement is one of the industry’s most distinguished awards. Unlike other kudocasts that reward dozens of contenders, there is only a single AFI recipient each year that is honored for his or her contribution to film. Last year’s AFI tribute to composer John Williams will be on the upcoming Emmy ballot for Best Variety Special, whereas this Diane Keaton presentation will be eligible at the 2018 Emmys.

Who has the most Oscars?

Watch out, Meryl! 'Borat' breakout Maria Bakalova is closing in on the Golden Globes queen in our…