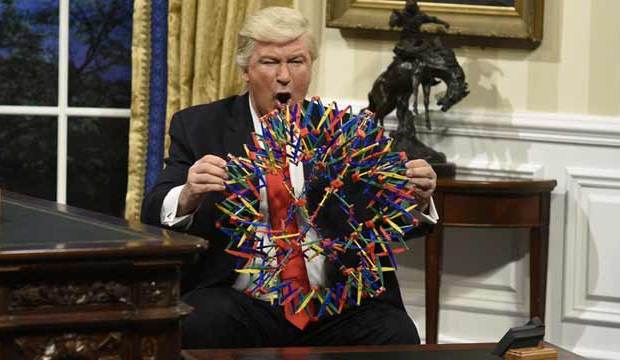 Alec Baldwin (“Saturday Night Live”) will win bigly at the Emmys this year according to our Experts, but just how bigly? We’ve polled 18 TV journalists from top media outlets to let us know who they think will win Best Comedy Supporting Actor, and most of them say it will be Baldwin for his portrayal of Donald Trump this season on the NBC sketch comedy.

Baldwin is an industry darling with 16 past Emmy nominations, including two wins for Best Comedy Actor for “30 Rock” (2008-2009). His track record at the SAG Awards is even better: he won Best Comedy Actor seven years in a row (2007-2013). That’s important to note because the Emmys changed their procedure last year from ranked ballots to a simple plurality vote of all eligible members of the TV academy’s acting branch. That more closely resembles SAG voting, so if he was capable of dominating those awards, he might be able to dominate these as well.

Discuss Emmys with Hollywood insiders in our notorious forums

But three of our experts think that Louie Anderson (“Baskets”) will win for the second year in a row: Matthew Jacobs (Huffington Post), Lynette Rice (Entertainment Weekly) and Glenn Whipp (LA Times). Since Anderson already won under this voting system, that may be a smart bet. Plus he has a pair of Daytime Emmys to his name for his voice-over performance in the animated series “Life with Louie.”

One last Expert, Matt Roush (TV Guide Magazine) is forecasting another win for Tony Hale (“Veep”). He’s been nominated every year for the last four years, winning in 2013 and 2015. And “Veep” is the two-time defending champ for Best Comedy Series, so if the series maintains its momentum he could certainly go along for the ride. But he’ll have to watch out if he’s nominated against another “Veep” cast member like he was last year. The plurality vote means there’s a greater risk of splitting the vote.

None of our Experts are predicting a victory for “Unbreakable Kimmy Schmidt” standout Tituss Burgess, but 13 out of 18 predict he will be nominated for the third year in a row. This year “Kimmy Schmidt” premiered later in the spring than usual (May 19), so it may be fresher in the minds of voters this time around, giving him an extra bump that may be just what he needs to push him over the top.

Brian Tyree Henry (“Atlanta”) will be nominated according to 11 Experts. This would be his first Emmy nomination. How he fares will depend on how fully the academy embraces “Atlanta,” which was a hit at the Golden Globes, Producers Guild Awards and Writers Guild Awards earlier this year. Some new shows are Emmy hits across the board right away, but sometimes it takes an extra year or two for supporting actors to get their due on an Emmy-loved show, as was the case with “30 Rock” and “Veep” in recent years.

Ty Burrell (“Modern Family”) is backed by seven Experts. Burrell has been nominated seven years in a row for “Modern Family,” winning in 2011 and 2014, so like Hale he’s hoping to three-peat. Unlike Hale, however, his show seems to be waning in support at the Emmys. Last year it had its lowest nominations total yet (four).

Five Experts predict a return nomination for another two-time Emmy winner, Andre Braugher (“Brooklyn Nine-Nine”). He’s been nominated in this category for the last three years, and in his career he has accumulated 10 Emmy bids. But his two wins were both for dramatic performances: Best Drama Actor for “Homicide: Life on the Street” (1998) and Best Movie/Mini Actor for “Thief” (2006). The TV academy seems to like Braugher more than they like his show as a whole — its only other nominations have been for Best Stunt Coordination, which it won in 2015 — so he may be vulnerable in a year with strong new contenders.

Four Experts are predicting that Hale’s “Veep” co-star Timothy Simons will be nominated for the first time, while three say that “Black-ish” actor Laurence Fishburne will earn his first bid in this category, though it would be far from his first nomination overall. Fishburne has won two Primetime Emmys out of seven nominations, and he just won a third Emmy earlier this spring in daytime for producing the animated program “The Snowy Day.”