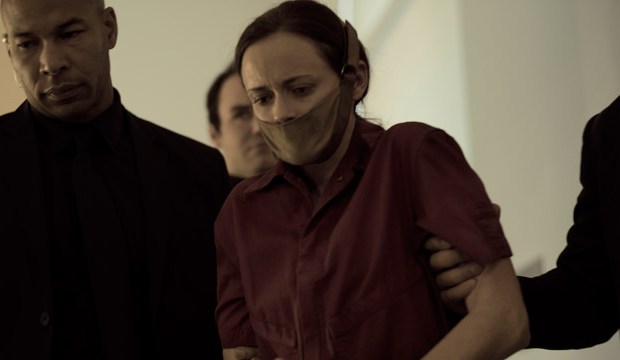 Alexis Bledel received her first career Emmy nomination this year as Best Drama Guest Actress for “The Handmaid’s Tale.” The “Gilmore Girls” vet stunned viewers with her image-changing role as Ofglen in Hulu’s adaptation of the classic Margaret Atwood novel, and contends for the episode “Late.”

After it’s discovered that she’s a lesbian, Ofglen is arrested for crimes against the state and put on trial alongside her wife, Martha (Laura Wilson). Found guilty, the two are loaded into a van and driven to a remote location where Ofglen, bound and constricted from speaking, is forced to watch her wife’s execution by hanging. She later wakes up to find that her genitals have been mutilated, a measure which Aunt Lydia (two-time Emmy nominee Ann Dowd) assures will help her resist temptation.

Can Bledel win for this episode? Let’s dive into the pros and cons.

With a mask over the lower half of her face for most of the runtime, Bledel doesn’t utter a single word in the entirety of the episode. Actors, who know how difficult it is to emote without dialogue, will surely be stunned by her ability to show fear, anger, love, and devastation with just her eyes.

Ofglen is a transformative performance for Bledel, best known as the rosy-cheeked teenager in “Gilmore Girls” and “The Sisterhood of the Traveling Pants” (2005). Voters who remember the actress in those roles will be stunned to see her in this one.

“The Handmaid’s Tale” was one of the breakout hits of this Emmy season, and it’s a strong contender to win Best Drama Series and Best Drama Actress (Elisabeth Moss). Bledel could get carried along in a sweep.

Bledel faces stiff competition by her own co-star, Dowd, who’s contending in this category for “The Leftovers” and as Drama Supporting Actress for “The Handmaid’s Tale.” Not only is Dowd very good in her “Leftovers” episode, she makes a strong impression in this one as well. Conversely, the two could siphon votes away from each other, swinging the win toward either Laverne Cox (“Orange is the New Black”), Shannon Purser (“Stranger Things”), Cicely Tyson (“How to Get Away with Murder”) or Alison Wright (“The Americans”).

Will voters have a hard time separating Bledel from her “Gilmore Girls” role? If so, it may work against her.