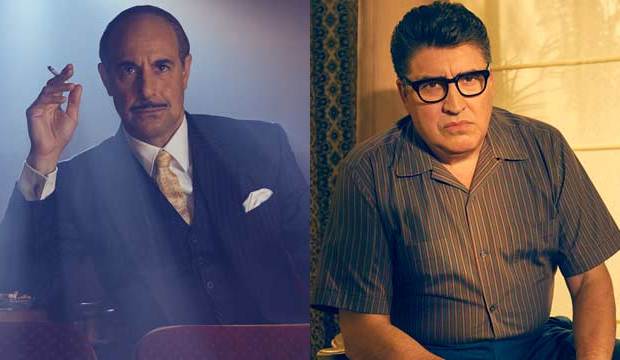 Best Movie/Mini Actress isn’t the only Emmy category where “Feud: Bette and Joan” could battle itself for the win. According to our experts, there’s another “Feud” feud brewing in the race for Best Movie/Mini Supporting Actor. As of this writing we’ve polled 15 journalists from top media outlets, and they’re split between two stars of that FX limited series: Stanley Tucci and Alfred Molina.

Molina also has support from six experts: Joyce Eng (TV Guide), Robert Rorke (New York Post), Paul Sheehan (Gold Derby), Peter Travers (Rolling Stone), Ken Tucker (Yahoo) and Glenn Whipp (LA Times). Molina plays Robert Aldrich, who directs Bette Davis and Joan Crawford in “What Ever Happened to Baby Jane.” Molina’s role is more prominent and sympathetic than Tucci’s, but he doesn’t have as extensive an Emmy track record. Molina has been nominated just once before, in this category for “The Normal Heart” in 2014.

Tucci and Molina aren’t the only strong competitors in this category. Two experts — Kerr Lordygan (Rotten Tomatoes) and Jarett Wieselman (Buzzfeed) — are predicting Alexander Skarsgard for his performance as an abusive husband in HBO’s “Big Little Lies.” He has yet to be nominated for an Emmy, but he is likely familiar to voters from his roles in the Emmy nominated programs “True Blood” and “Generation Kill,” so he may be considered due.

Our last expert, Matt Roush (TV Guide Magazine), is predicting a victory for Martin Freeman in “Sherlock: The Lying Detective.” Freeman plays Dr. John Watson in the modern-day update of the Arthur Conan Doyle detective stories. He has been nominated twice for this role already, winning this category in 2014. He was also nominated in 2014 for his leading role in the first season of the anthology series “Fargo.” Overall “Sherlock” has won nine Emmys out of 34 nominations, including Best TV Movie in 2016 for “The Abominable Bride,” so it’s never wise to underestimate the series, though Freeman was left out last year when “Abominable Bride” took top honors.

None of our experts are predicting a victory for David Thewlis (“Fargo”), but nine are predicting his nomination for playing British businessman V.M. Varga. The BAFTA nominated actor has no previous Emmy bids.

Eight experts are predicting a nomination for Hank Azaria (“The Wizard of Lies”) as Frank DiPascali, who worked for Bernie Madoff (Robert De Niro) and helped him defraud investors out of billions of dollars. Azaria is a longtime Emmy favorite with 12 nominations and six wins. Four of those victories were for his voice-over performances on “The Simpsons” (1998, 2001, 2003, 2015). Another was in this category for “Tuesdays with Morrie” (2000), and the most recent was Best Drama Guest Actor last year for “Ray Donovan.”

Michael Stuhlbarg (“Fargo”) and Benito Martinez (“American Crime”) will be nominated according to six experts each. Neither has contended for an Emmy before, but both are veteran character actors with impressive lists of credits. Stuhlbarg has appeared in acclaimed films including “A Serious Man,” “Hugo,” “Lincoln” and “Arrival,” among many others, plus TV programs like “Boardwalk Empire” and “Transparent.” Martinez has also appeared in “House of Cards,” “How to Get Away with Murder” and “The Leftovers” in addition to “American Crime.” Character actors often succeed at the Emmys because they tend to appear in a wide variety of projects and thus work alongside many peers from the TV academy actors branch.

Speaking of character actors, four experts are predicting a nomination for Reg E. Cathey for “The Immortal Life of Henrietta Lacks.” He has three previous Emmy nomination for his recurring guest role in “House of Cards,” winning Best Drama Guest Actor in 2015.

Two experts are predicting that James Cromwell will make the cut for “The Young Pope.” He has four past Emmy nominations, and he won this category in 2013 for his villainous role in “American Horror Story: Asylum.”

Be sure to make your Emmy predictions. Weigh in now with your picks so that Hollywood insiders can see how their TV shows and performers are faring in our Emmy odds. You can keep changing your predictions until just before nominees are announced on July 13. And join in the fierce debate over the 2017 Emmys taking place right now with Hollywood insiders in our TV forums. Keep up with the latest Gold Derby entertainment news.

4 FX writers on the benefits of representing a 'tapestry of cultures, identities, experiences and…

'Fargo' writer/producer Scott Wilson on having a diverse creative team: 'It's ideal to have as many…