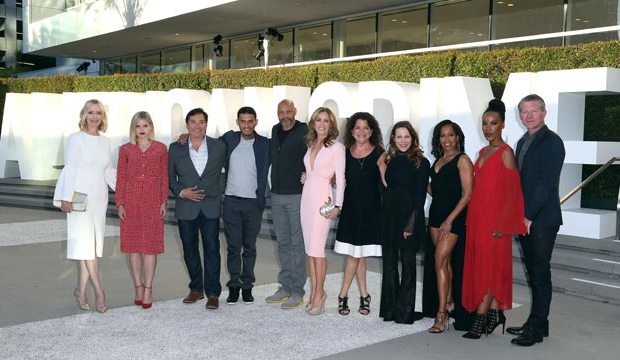 The stars and creators of ABC’s “American Crime” Season 3 were on-hand for a panel discussion for prospective Emmy voters Saturday night at the TV academy’s Wolf Theatre in North Hollywood. Among the cheer-worthy moments from the sold-out event was when showrunner John Ridley said about his diverse cast, “This group, these individuals, this cast — this is what America looks like.” Appearing in person were, from left to right in the photo above: Janel Moloney, Ana Mulvoy-Ten, Benito Martinez, Richard Cabral, Ridley, Felicity Huffman, moderator Debra Birnbaum, Lili Taylor, Regina King, Mickaelle X. Bizet and producer Michael McDonald.

“Unfortunately even in 2017, these types of individuals are not regularly represented anywhere in media, despite the fact that there are so many opportunities out there,” continued Ridley, who won an Oscar for adapting the screenplay for “12 Years a Slave” (2013). “So to have had the opportunity for three seasons to represent, to discuss, to engage, to challenge, we could not have done that without an amazing group of writers [and] an outstanding collection of directors. But certainly we could not have done it without this cast. I cannot be objective, but this is the best cast working anywhere –“

“In the world!” interrupted Huffman, who’s earned back-to-back Emmy nominations for the anthology series. She previously won Best Comedy Actress for the breakout first season of “Desperate Housewives” (2005), which also aired on the alphabet network. As for coming back each year as an entirely different character, Huffman admitted, “It’s like being in a candy store. It’s an actor’s dream. It’s heaven.”

‘American Crime’ Season 4 spoilers: ‘Women in the workplace’ will be theme if show is picked up

King added, “Felicity and I … both subscribe to the same idea that to have the opportunity to do almost a long-form film in a way and let it go and leave it on the floor and come back and jump into something new, it’s like she said, it’s like being in a candy store. Anyone who truly looks at what we do as an art form can understand that feeling.” So far, King is the show’s sole representation at the Emmy podium, having won twice now for Best Limited Series Supporting Actress (2015 and 2016).

Before the Q&A, audience members were treated to a violinist playing Emmy-winner Mark Isham‘s (“EZ Streets” in 1997) haunting theme music. ABC then screened the Season 3 finale of “American Crime,” which concluded this year’s exploration of oppression, including slave labor, sex trafficking and physical abuse. Following the lively panel, cast members mingled with Emmy voters out in the lobby, where bellies were filled with buffet food, passed hors d’oeuvres and, of course, wine and beer.