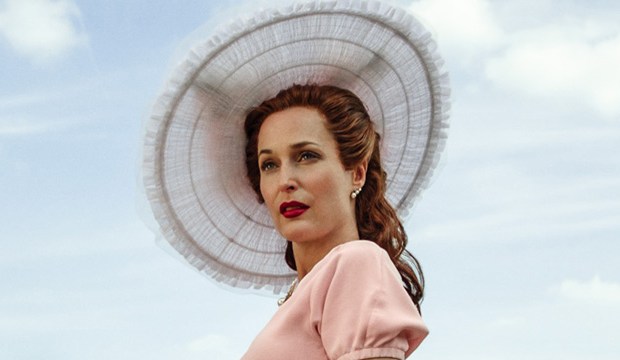 Gillian Anderson is having a great week. On April 20 Fox announced that she and David Duchovny would return for Season 11 of “The X-Files,” and now Starz has unveiled a first-look photo at Anderson’s new “American Gods” character. Anderson plays Media, the new goddess of television, in the supernatural drama series adapted from Neil Gaiman‘s successful novel. In the book Media appears in the form of “I Love Lucy’s” Lucy Ricardo, but in the photo below with Bruce Langley (Technical Boy), Anderson is dressed in an elegant turn-of-the-century pink dress and hat.

Anderson is a recurring guest star in the first season of “American Gods,” which airs the first of its eight episodes April 30 on the premium network. This marks her first TV appearance after starring as Stella Gibson in Netflix’s “The Fall” (2013-2016) and Dr. Bedelia Du Maurier in “Hannibal” (2013-2015), which was also produced by Fuller.

Of course, Anderson gained international fame playing FBI Agent Dana Scully in Fox’s long-running “The X-Files,” for which she won the Emmy for Best Drama Actress in 1997. The sci-fi drama originally aired from 1993 to 2002, then it returned for a special six-episode revival in 2016. “The X-Files” Season 11 will begin filming this summer, to premiere sometime in late 2017 or early 2018.