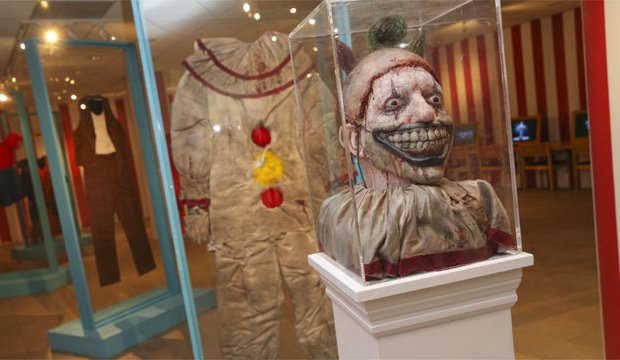 When visiting the “American Horror Story: The Style of Scare” exhibit at the Paley Center in Beverly Hills, you may get goosebumps when you first catch sight of Twisty the Clown’s costume and bust. (Check out my spooky pic below, if you dare.) Twisty’s blood-splattered outfit is just one of the dozens of “AHS” costumes sprinkled throughout the museum, and fans everywhere are encouraged to check it out before it closes on July 30. Admission is free, so what are you waiting for?

Longtime “American Horror Story” costume designer Lou Eyrich — who won a trio of Emmys for “AHS: Coven,” “AHS: Freak Show” and “AHS: Hotel” — was on hand to introduce her magnificent exhibit earlier this month. In an interview with the Paley Center for Media, Eyrich explains, “Twisty the Clown had many sketch ideas for costumes and masks until we landed on the final costume. We prepared several muslins for John Carroll Lynch, from jumpsuits to two-piece sets to accommodate the hot weather in New Orleans.”

Another major must-see photo opportunity in the exhibit’s upstairs room is the decapitated head of the Countess from “AHS: Hotel.” As Eyrich explains, the Countess’ wardrobe was the most difficult to get right. “She was meant to be timeless, yet contemporary as she’s living in 2016. Also, we wanted to make sure we created a character unlike Lady Gaga.”

Each of the show’s six seasons are featured within the museum space. When you first enter the building along N. Beverly Drive, the iconic Rubber Man (Evan Peters in “AHS: Murder House”) welcomes you to the Paley Center. Other notable costumes include those of Sister Jude (Jessica Lange in “AHS: Asylum”), Myrtle Snow (Frances Conroy in “AHS: Coven”), Dot and Bette Tattler (Sarah Paulson in “AHS: Freak Show”) and the Butcher (Kathy Bates in “AHS: Roanoke”).

Eyrich praises the Paley Center for allowing her to display six years’ worth of costumes. “I’m still pinching myself to see if this opportunity is real,” she readily admits. “It’s a once in a lifetime chance to display our work.” “American Horror Story” returns to FX next season. Watch our exclusive interview with Sarah Paulson, in which she teases Season 7.

I don’t know why I’m smiling — I’m secretly freaking out standing next to #Twisty‘s costume at #PaleyCenter! pic.twitter.com/cefcSqJo1M