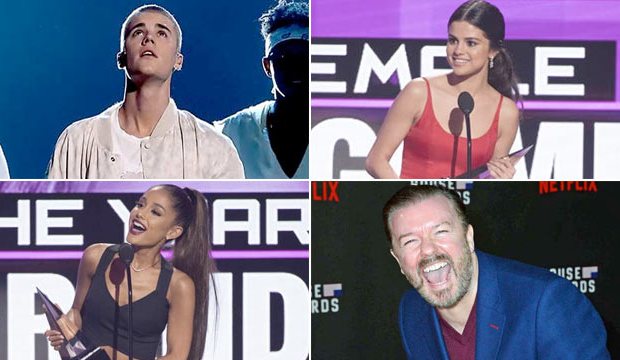 Now that ABC is rebooting “American Idol” to air in 2018, the long-running reality TV show will need to fill its empty judges’ chairs. While we’d love to see Fox’s original trio of Simon Cowell, Paula Abdul and Randy Jackson back again, it’s unlikely the alphabet net will want to drudge up the past. Instead, ABC is more likely to take a “The Voice” approach from rival NBC and hire chart-topping music artists to critique the next batch of wannabe stars. With that in mind, take a look at our Top 12 “American Idol” dream judges and then vote in our poll below with YOUR pick.

Justin Bieber — Love him or hate him, Bieber brings in ratings, and he’s exactly the kind of artist ABC will be looking for if the “American Idol” reboot ever comes to fruition. Cue the crying girls!

Selena Gomez — Forgetting the drama of her being Bieber’s ex-girlfriend, Gomez has come into her own as a pop music sensation in the past few years. To take a title from her hit single, she will be so “good for you,” ABC.

Taylor Swift — Would Swift ever consider taking a break from her worldwide fame to sit in a chair for months on end? Hey, if Miley Cyrus and Pharrell Williams can do it for “The Voice,” we have a feeling Swift would be game.

Beyonce — We’d love to see Queen Bey take on a mentoring job and help shape the lives of young artists. Plus, as her family continues to grow, perhaps Beyonce would be keen to take a day-to-day job like “American Idol” in order to stay closer to home.

Adele — The world loves Adele for her voice and stage presence, but her personality is what really makes her perfect for “American Idol.” Like original British judge Cowell, Adele would have no problem telling contestants what she really thinks.

Kanye West — The current President of the United States got his start on an ABC reality show, so why shouldn’t West — who’s hinted at a 2020 presidential run — want to put in his time doing a similar job?

Drake — His on-again, off-again relationship with former “American Idol” star Jennifer Lopez might make him a controversial choice to judge, but Drake would undoubtedly bring in countless new viewers to the long-running show.

Lady Gaga — After winning the Golden Globe for “American Horror Story: Hotel” and killing it in her Oscar performance of “Til it Happens to You,” Lady Gaga stole the Super Bowl with her halftime show. She’s. On. Fire.

Kelly Clarkson — This one is a no-brainer. As the original “American Idol” winner back in 2002, Clarkson is arguably the most respected and talented star to ever come out of reality television. She also guest-judged “Idol” in its final season, so she’s already battle-tested.

Ricky Gervais — Our wildcard pick isn’t known for his music talent, but neither was Cowell. We think Gervais would be a perfect choice to sit in Cowell’s seat since he’s hilarious, biting and above all, brutally honest. Just ask all those celebs he roasted at the Golden Globes.

‘American Idol’ reboot: Ryan Seacrest could host if he’s willing to do a lot of flying

“American Idol” had an up-and-down history at the Emmys throughout its 15-year run, winning only eight times from its 67 nominations. Perennial host Ryan Seacrest was recognized as Best Reality Host seven times, losing to Jeff Probst (“Survivor”) in 2008, 2009, 2010 and 2011, Tom Bergeron (“Dancing with the Stars”) in 2012, Heidi Klum and Tim Gunn (“Project Runway”) in 2013 and RuPaul Charles (“RuPaul’s Drag Race”) last year.

Katy Perry on Arthur Gunn's controversial no-show in 'American Idol' finale: That was a 'curveball'…