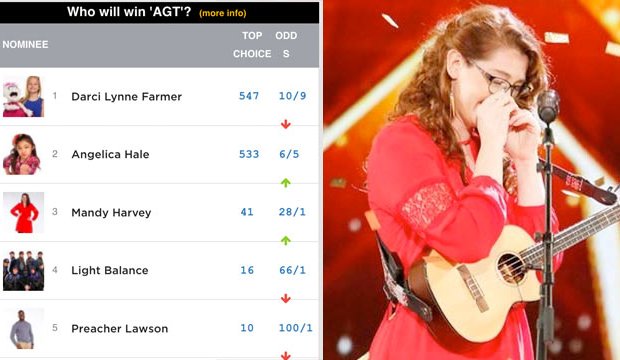 The “America’s Got Talent” 2017 season finale airs Wednesday, September 20 on NBC. While the two acts with the best chances to win are Darci Lynne Farmer (10/9 odds) and Angelica Hale (6/5 odds), there is a strong contender in third place that shouldn’t be forgotten: Mandy Harvey (28/1 odds). Can the deaf singer who’s captured America’s heart with her beautiful voice overcome the odds and win “AGT”?

The last time Harvey performed during the Semifinals 2 episode, she wowed the four judges — Simon Cowell, Heidi Klum, Mel B and Howie Mandel — with her original song “Release Me.” Harvey’s Golden Buzzer mentor Cowell was so impressed that he compared her to the first time he heard Adele sing. This was Harvey’s third original song on Season 12 after singing “Try” in her audition and “Mara’s Song” during the Quarterfinals.

The other three “AGT” judges followed Cowell’s lead by praising Harvey’s latest performance. Mandel noted that Harvey “transcends hearing,” Mel B admitted the song was “more powerful than you could ever, ever imagine,” and Klum said this was her best performance yet. Klum also praised her for using sign language during the performance for the first time, something that Harvey was happy to do because it allowed her to express herself.

Do YOU think Harvey can overcome the odds and win “Americas Got Talent” 2017? She currently comes in third place on our winner’s chart behind Farmer and Hale, and just ahead of Light Balance and Preacher Lawson. See more “AGT” odds and rankings.