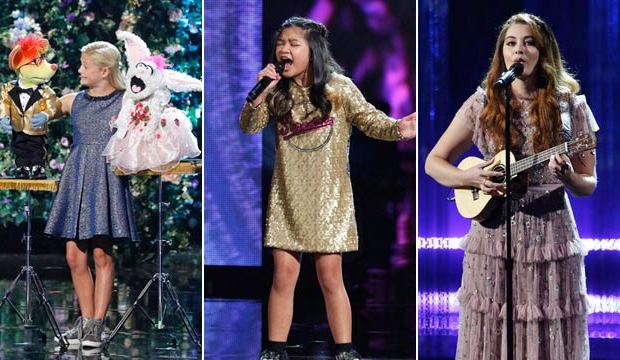 After a summer of Golden Buzzers, child singers and shocking eliminations, “America’s Got Talent” 2017 held its season finale at the Dolby Theatre on Wednesday, September 20. The Top 10 Finalists performed on Tuesday during the Finals episode, with “AGT” viewers voting overnight for their favorites in anticipation of Wednesday’s live finale results episode. Who did America vote for to win Season 12? Based on exclusive Gold Derby predictions, the top three acts heading into the season finale were singing ventriloquist Darci Lynne Farmer, child singer Angelica Hale and deaf singer Mandy Harvey.

In the event you missed the episode (or simply didn’t want to sit through two hours of reality TV padding), you can check out my minute-by-minute recap of the “Americas Got Talent” 2017 finale results below. Also be sure to sound off in the comments section about the season’s best and worst moments. Keep refreshing/reloading this page as we’ll be updating live.

7:59 p.m. — The show is about to begin! I’m in the audience up in the mezzanine, so I’ll be giving you my first-person accounts of what’s happening throughout the next two hours. Right now the warm-up guy is revving up the crowd, and there’s a countdown on the main screen letting us know that the show will begin in 5 … 4 … 3 … 2 … 1 …

8:02 p.m. — Host Tyra Banks comes out flanked by the Top 10, and then she reveals that the show had the biggest vote in “AGT” history for this finale. Whoa. The four judges are introduced for the final time this season: Simon Cowell, Heidi Klum, Mel B and Howie Mandel.

8:04 p.m. — Now they’re showing an elongated “previously on” segment of last night’s performance show. Meanwhile, live on stage the production crew is setting up for the first performance of the night.

8:11 p.m. — Banks makes fun of Cowell’s “gobsmacked” remark before introducing a video package of the judges making fun of Mandel’s worst jokes throughout the season.

8:16 p.m. — Back from commercial and we’re seeing all of the acts playing around in the Dunkin’ Lounge. Hale tries to teach Banks how to hit a high note, and everyone in America is covering their ears.

8:18 p.m. — All of the finalists will be featured tonight in duels or solo performances, and first up is Angelica Hale and Kechi. They’re singing Kelly Clarkson’s “What Doesn’t Kill You (Stronger)” and then … IT’S KELLY!

8:20 p.m. — Now Clarkson is singing alone on stage. Her new single “Love So Soft” is soooo good. Can we forget the whole competition and just turn this into a Kelly Clarkson concert?

8:22 p.m. — Clarkson says that no matter what happens, Hale and Kechi are both winners because all of the Top 10 have the exact same exposure. Clarkson then reminds us that this is the exact same stage where she won “American Idol” in 2002, with Cowell as one of the judges.

8:24 p.m. — Before commercial, it’s the next silly judge video. This time they’re all making fun of Mel B for having trouble understanding some of the acts. Do we really need these video packages?

8:29 p.m. — Banks introduces the next acts (Diavolo and Light Balance) from her position up in the rafters. Spoiler alert! Diavolo’s portion was actually filmed earlier in the day and was not live. When they finish, Light Balance comes out next and they are live, just in case you were wondering.

8:31 p.m. — Audience members were handed glow sticks during the commercial, and now we know why. Toward the end of Light Balance’s performance the cameras show the crowd and everyone is instructed to wave their glow sticks in the air.

8:32 p.m. — Surprise! It’s Derek Hough as one of the Light Balance dancers. He jokes that he was in disguise for the “whole season” before plugging a show that’s not currently on the air, “World of Dance.”

8:33 p.m. — The low point of the show so far is seeing a music video featuring Banks with many of this season’s worst acts, like the leprechaun and the Asian woman who had a crush on Cowell. In other words, time for a bathroom break!

8:39 p.m. — In lieu of a live performance from Sara and Hero, we’re shown a video of Sara Carson trying to train the judges’ dogs. As is usually the case, Mandel is the class clown and at one point squeezes through a doggie tunnel. “I feel like I’ve been reborn,” he says after crawling out the other end.

8:41 p.m. — Oscar winner Marlee Matlin is on hand next to introduce Mandy Harvey, who in turn welcomes out country superstar Shania Twain. They sing “You’re Still the One” together, and then Harvey leaves the stage and Twain belt out a solo rendition of her new single “Life’s About to Get Good” complete with male backup dancers wearing pastel suits.

8:47 p.m. — What do the judges find annoying about Klum? Does anyone care? Apparently she has a knack for pointing things out, like spinach in teeth, or Cowell’s chest hair, and it gets on all of their nerves.

8:52 p.m. — Cowell’s annoying habit is that he feeds oranges to the live audiences and that he’s attracted to older women. Again, there is no reason for these judge spotlights. Can we move on to something else?

8:53 p.m. — Darci Lynne Farmer gets a clip package AND a live performance. First up, she’s in the dressing room when Jeff Dunham and his puppet Walter talk to her about the future.

8:55 p.m. — Then, Farmer does a live act with Season 2 winner Terry Fator. The less said about Farmer’s flubbed line during their duet of “Anything You Can Do,” the better. Everyone makes mistakes!

9:04 p.m. — In an impressive pre-taped piece, Mandel and Kevin Nealon sit with Preacher Lawson at the Laugh Factory and give him advice. The package ends with Mandel about to tell Lawson the most important thing about the comedy business … and then he walks away.

9:08 p.m. — Young and poised Evie Clair is sitting on a stool singing “Okay Day” before introducing James Arthur. The crowd doesn’t go nearly as wild for Arthur as they did for Clarkson or Twain.

9:10 p.m. — When Arthur begins his second song — “So You Won’t Let Go” — the audience reacts a bit stronger, as if they finally realize who this guy is. Chase Goehring soon comes out, and they finish the song together as a duet.

9:13 p.m. — Since “America’s Got Talent” has been running for 12 seasons, Banks decides to test the judges with some trivia questions. Who won Season 7? Olate Dogs. Who’s the youngest winner of all time? Bianca Ryan. While Cowell, Klum and Mel B bomb the test, Cowell gets every question correct, declaring, “I produce the show.”

9:19 p.m. — Cowell surprises Banks with a clip package of positive, fun clips from her first year hosting the show. See, now this video is actually worth watching! Best clip package of the night.

9:22 p.m. — Banks is visibly emotional after watching her tribute video. She then introduces a clip package of the Top 10 reflecting on what “AGT” has meant to them and how it’s changed their lives.

9:25 p.m. — All 10 act come out on stage for the results portion of the show. As we cut to commercial, many of the finalists have fun with each other by playing quick games of rock, paper, scissors. Farmer has a bit of trouble playing, as one of her hands is currently inside of her puppet, Petunia.

9:29 p.m. — After 90 minutes of padding, it’s finally time for the results. Fifty-two million votes were cast last night, a new record for “AGT.” Banks will be bringing out acts in pairs and eliminating one person from each pair. First up, it’s Mandy Harvey vs. Chase Goehring. And Harvey makes it into the Top 5!

9:32 p.m. — The next pairing pits Evie Clair vs. Sara and Hero. The results is certainly a shocker, as the dog act makes it through! Poor Clair has to go home, but not before getting a big hug from Banks.

9:34 p.m. — Now it’s Diavolo vs. Light Balance. The audience boos loudly at the thought of one of these groups going home. Congrats to Light Balance for making it into the Top 5! But everyone is sad for Diavolo.

9:36 p.m. — The fourth match-up is Preacher Lawson vs. Darci Lynne Farmer. As soon as he hears who he’s up against, Lawson threatens to walk off stage. Shocking no one, Farmer makes it through while Lawson is eliminated.

9:38 p.m. — The final head-to-head showdown pits Angelica Hale vs. Kechi. The audience overwhelming shouts “Angelica!” And they’re right, as the 10-year-old girl makes it through over the inspirational plane crash survivor.

9:42 p.m. — It’s time to find out “Who has won this darn thing!” shouts Banks. The fifth place act is announced: Sara and Hero. Poor Hero has no idea what’s going on, even as the audience begins chanting “Hero! Hero! Hero!”

9:48 p.m. — The fourth place act is announced, and it’s a heart-breaker: Mandy Harvey. “I’m motivated and I’m running,” Harvey says about her future.

9:50 p.m. — With only three acts left, it’s not a surprise to see Light Balance eliminated in third place. The neon dance act is disappointed, but they admit they were on “an unbelievable journey.”

9:51 p.m. — Mel B makes an oopsie when she calls Light Balance a “loser,” and Mandel jokes that in America “loser” means “winner.”

9:57 p.m. — Farmer is crying and Hale looks like a ghost. Before the winner is announced we see a nice clip package of the two girls’ journeys on Season 12 of “AGT.” One of them is about to be a millionaire. Who will it be? The winner is …

10:00 p.m. — Confetti rains down from the ceiling of the Dolby Theatre as all of the finalists and judges rush out on stage to congratulate the 12-year-old ventriloquist from Oklahoma City, OK. And that’s a wrap! Are you happy that Darci Lynne Farmer won “Americas Got Talent” 2017? Sound off down in the comments section.