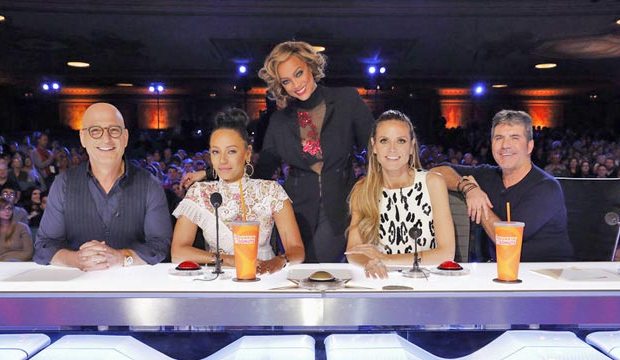 “America’s Got Talent” has four colorful personalities on the judges panel that gel well together, but there’s always one judge the audience does not appreciate. Between Howie Mandel frustratingly not understanding some acts, Mel B’s snarky attitude, Heidi Klum not offering constructive criticism or Simon Cowell being too mean, which judge grinds your gears the most? Mandel, Mel B, Klum, and Cowell have been judging “America’s Got Talent” for two years together now, and it shows. The judges have clearly gotten to know each other’s personalities by now and frequently take jabs at one another.

While the auditioning acts are clearly the stars of the show, we often see Cowell and Mel B bickering or Mandel throwing in a sarcastic comment making fun of Klum. Which “AGT” judge do you hate the most? Vote in the poll below after reading our analysis of each judge’s pros and cons.

Mandel is the longest-running judge on the “America’s Got Talent” panel, joining for Season 5 in 2010. With his long career of standup comedy and show business behind him, fans can often rely on Mandel for a good quip, whether it be at a fellow judge or auditioning act’s expense. He is usually charmed by young acts, and often presses the Golden Buzzer for them, but with some acts he simply does not understand the appeal.

Mel B is unafraid to speak her mind even when her fellow judges disagree with her. She sometimes tells acts they aren’t necessary up to the standards of “Americas Got Talent,” and when Cowell picks on her past career as a Spice Girl, she dishes it right back and even throws water at him. Other times she shows clear compassion and love for acts that are truly special.

Klum is arguably the nicest judge of the four, bringing her motherly instincts to the panel. While she does come from years of reality TV experience on “Project Runway,” she tends to be a little more reserved compared to the other judges. She typically enjoys most auditions, but some of the more untraditional talents tend to be lost on her.

Cowell is the newest member of the panel, having just joined in Season 11 last year. However, as the creator of “AGT” and frequent panelist on talent competitions, he does bring the most experience as a judge. While Cowell’s nasty side kicks in now and then, he has clearly softened since his grumpier days on “American Idol.” Cowell is often at the center of disagreements, and he always argues his case passionately for or against the auditioning act.